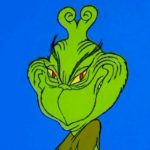 TOP HAT Takes A Look At The Often Creepy, Nightmare World Of Dr. Seuss (IF WE DARE!): 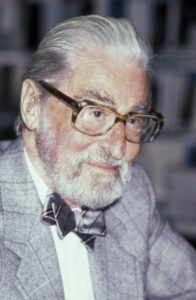 A few months ago, we came up for air from our backwoods, swamp abode to take a look back on the darker side of that most beloved of children’s programs, Sesame Street. This time, we’ll look at another childhood favorite (our own among millions of others)—Dr. Seuss. Dr. Seuss, aka Theodore Geisel, in our opinion, a genius, was the greatest American children’s book author—ever. Full stop. He combined an ingenious ability with rhyme, meter, and word play with his own unique out-of-this-world art and imagination to create the most memorable works for children ever seen before or since.

Having said that, however, there was another side to the good Doctor—a darker side. At best, Geisel’s characters, landscapes, and architecture could be strange, bizarre, but often, especially later in his career, they could also trend towards the unsettling, disturbing, haunting, or outright creepy. Let us go then, you and I, and take a closer look back at this beloved (but often strange) childhood world.

The People of Seuss: Human… or Humanoid? 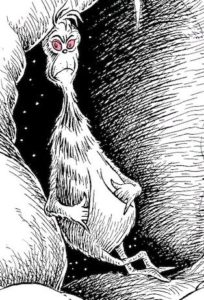 Not Quite Human: The Grinch’s hide comes equipped with its own built-in hoodie and pockets. Please note the demonic red-glowing eyes.

First, let’s look at the people of Seuss’s books. Some have accused Dr. Seuss of being racist. That may be, especially judging by his early political cartoons, but regarding racism in his books, of that we’re not so sure. 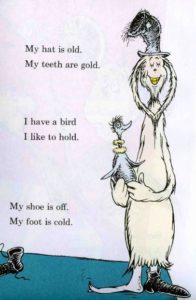 Was ist Dies Mann!! The weird guy from One Fish, Two Fish, Red Fish, Blue Fish. Where does the zoot suit end and flesh begin?

With strange furry (or feathery?) body suits, impossibly long inhuman fingers and often stubby tails, we have problems calling these creatures human. In fact, not only are they not human, many of them are disturbingly inhuman. Consider, for example, one of Dr. Seuss’s most famous creations—the Grinch.

And what in the world is a “Sam-I-Am” (much less the guy that didn’t like green eggs and ham?).

The Grinch (How The Grinch Stole Christmas, 1957) 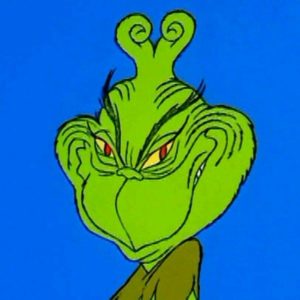 The Most Famous Evil Smile in Cartoon Programming: The Grinch likes his new idea.

Going back to the Grinch, in his original presentation by Dr. Seuss in the 1957 book, on the very first page, he glares at the young reader, his eyes demon red. However, even this version of the Grinch was far less creepy than the 1966 Chuck (of Warner Bros./Bugs Bunny fame) Jones’s version (which was unlike anything seen before in prime-time cartoon programming). It is said that Geisel had reservations about having the greatest horror actor of all time–Boris Karloff–do the voice of the Grinch, as he feared it would frighten children. He really should’ve kept an eye on Jones and his staff whose animated, reinvented Grinch, with his crooked teeth and maniacal grin, almost becomes a Seussian Joker. Karloff’s masterful voice-over adds the finishing touch in bringing this Christmas nightmare to life.

If it weren’t for his conversion to Christianity at the end of the book/film, the Grinch would have basically been a horror story, worthy of anything put out by Warren, EC, or Hammer Studios. 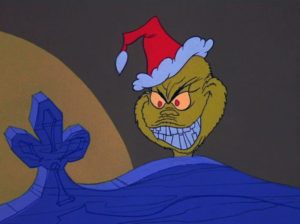 How would you like to wake up to this? 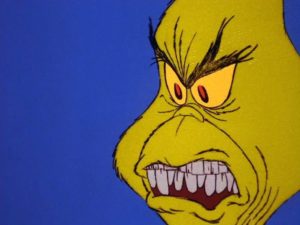 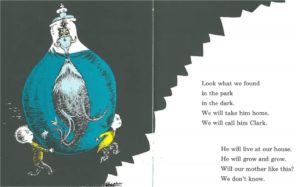 The kids unwittingly bring their own destruction (that would be Clark) into their home.

Maybe it’s the strange curving tusks, the dark cross hatching of the page, the yellow eyes, or the Seussian smile that says, “Thanks for bringing me in from the pond in the dark, kids! Now—let’s eat!”

And yes, let’s name his ass “Clark.” Let’s keep him at home, feeding him mice, rats and what-not, until he “grows and grows” and Dad finally drags him to the stream behind the house where he swims down to the local lake where he continues to “grow and grow” over the next twenty years, feeding on anything and everything under the water or that gets too close to the shore (like stray dogs, kids, etc.) until he returns, devours his owners, the village, and goes on a royal King-Kong/Godzilla rampage, destroying several counties until the army has to come in to straighten things out. Yes, kids, LET’S! NOT! Leave Clark in the park in the dark—PLEASE! 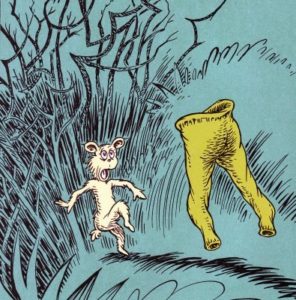 Scared out of your pants? We know we were.

The rhetorical (titular ) question that runs throughout the book is both taunting and challenging to the preschooler. Two nocturnal creatures–a typical Seussian “anthropomorphic” and a pair of lime green pants that “hung in the air with nobody inside them”– encounter one another in a world where the sun never rises. Seuss employs heavy ink strokes of cross hatching against a backdrop of midnight blues. The visuals presented are stark and evocative of Andrew Wyeth’s bleak Christina’s World. A perfect book for youngsters just getting over bedwetting! 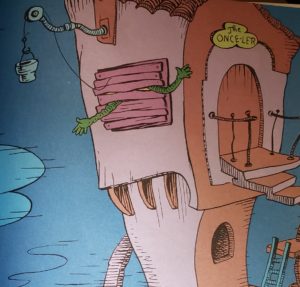 The Lair of the Once-ler: Would you be creeped out if you came upon this guy’s house?

Written on the heels of the infamous Cuyahoga River fire of 1969, Seuss’s stark warning on the environment seems to be coming into reality.

A young boy sets out on the Street of the Lifted Lorax where the “..wind smells slow-and-sour when it blows and no birds ever sing excepting old crows…” where he visits The Once-ler, holed-up in his towering abode, a metaphor of the crass industrialist. As the tale unfolds, the reader sees the gradual diaspora of animals and plants. The Once-ler’s factories churn out “thneeds” (that essential product that everyone needs) in an exercise of strip-mining that Saraman the White would have been proud of. “Smogulous smoke” , “Gluppity-glup” and “sloppily slop” choke the skies, poison the earth, and pollute the rivers. The vibrant green landscape is eventually reduced to a dull gray , as the land is made gutted and sterile of life.

Perhaps our own consumerism will consume us and leave us “thneed” shoppers awash in a sea of plastic.

But whether Seuss’s strange humanoids were Christmas-hating demonic creatures, smiling sea monsters, or polluted, post-apocalyptic capitalists, it seemed that in his early career, his work was strange, bizarre, and unnerving more by accident. As we will see next week in the second installment of our review, the good doctor’s penchant for the creepy takes a frightening and purposeful turn for the worse in his later books.