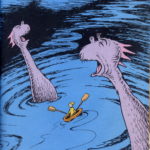 Last week, we began our exploration of the haunting, strange world of Dr. Seuss, where we examined such subjects as The Grinch, Clark, the sea monster, and the world of the Lorax. This week we’ll see that Seuss’s later books became even darker, stranger, and even more disturbing, as seen in the exhibits below. 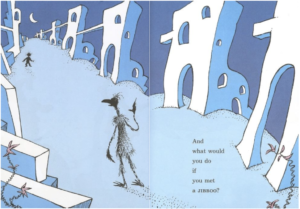 Showdown with the Jibboo (hint: TIME TO RUN!)

“What would you do if you met a Jibboo? ” The short answer to that question is shit yourself . This bird-like creature– whose face is occluded in shadow– is pictured ominously approaching some hapless kid at the opposite end of an eerie, and abandoned street in some nameless, ancient city. In just two pages, Seuss adroitly presents haunting imagery that is difficult to forget, let alone come to terms with. 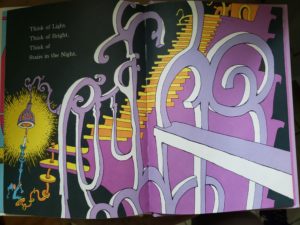 “Stairs in the Night”: Hmm. . not much light, not very bright, and not much of a stairs. Truly a nightmare for the acrophobic.

“Stairs in the night.” With only a small light, a figure stands at the precipice of an endless and winding staircase, spiraling upwards into darkness so pitch, that light itself struggles, flickers, and fails. The steps are treacherous, and without railings. One misstep leads to bottomless chasms of some unknown abyss. In a word, it is a scene reminiscent of all things nightmarish. 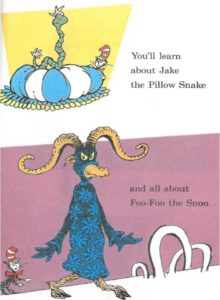 Remembering that according to legend, Baphomet was both a god and goddess, Dr. Seuss made sure that Foo-Foo wore a floral pattern for his/her gown.

Here it is, this book’s headliner of the horror double feature, “Foo Foo the Snoo.” And your reaction, like ours, is no doubt also, “WTF?!! What in the world were you thinking, Dr Seuss?” Unlike the majority of Dr. Seuss’s characters, Foo Foo is lacking the terror-ameliorating Seussian Smirk. Instead, it seems to be frowning, its eyes demon-yellow. And that makes sense. After all, Foo Foo has hooves, the horns, and the goatish snout. This is clearly Dr. Seuss’s version of Baphomet. Even Young Cat is sh!&ing his underpants (er, or he would be if Dr. Seuss’s characters wore underpants). Fortunately, we were not exposed to this nightmare-inducing monstrosity when we were young.

Backing up the headliner Foo-Foo in this double horror feature, the good doctor also introduces “Jake, the Pillow Snake.” Again, Young Cat hides as he craps his non-existent Schrödingerian underpants. And wouldn’t you too? After all, if you were relaxing and a huge snake with a typical Seussian smile and venom like a Black Mamba’s slithered up from the crack separating the back cushions from the seat cushions on your favorite couch (you know, where you lose your change?) and bit you like one of those crazy pythons that bite your junk after crawling up from the pipes of the toilets in cheap Thai motels, we think we’d crap our pants too!

This was Dr. Seuss’s final book published within his lifetime. A review by Booklist had the following to say on it:

“Writers often tend to mellow in their later years, but fortunately Dr. Seuss seems just as cantankerous and quirky as ever. Life may be a ‘Great Balancing act’ but through it all ‘there’s fun to be done.’”

“Cantankerous and quirky” is putting it mildly. In this, Geisel’s last book, the writer seems to have gone off the deep end as never before, with landscapes and architecture that out-Seuss Seuss! However, it also seems as if he was going out of his way to depict strange and unsettling images as never before as well.

Witness the following for evidence:

It is said that many parents give this book as a gift to their kids upon high school or college graduation. They could handle this book. But a typical 5-year-old? We’re not sure of that. Just take a look at some of the following pages: 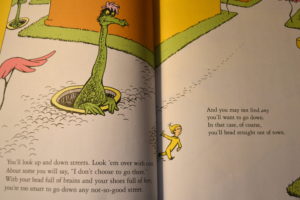 Passing on The “Not-so-good Street”

1) The “Not-so-good Street”: What kind of nightmare city features angry-looking dragon-like monsters poking their heads out of the city’s manholes (presumably waiting to eat passing sanitation workers and other visitors)? We would pass on even a short visit to a city like that; 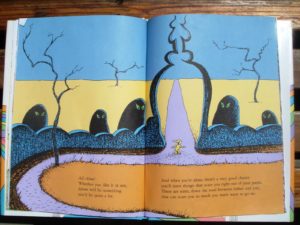 2) “On the Road between Hither and Yon”: In this nightmare scape, the young narrator is facing a fence on a lonely barren road, guarded by menacing black shadows. This scene is definitely something more out of a nightmare than a children’s book;

3) The Sad Sea Monsters: On one hand, you kind of feel sorry for these creatures, which seem to be mourning or wailing in sorrow. All the same, would you really want to be rowing a boat between these things in the middle of the night? 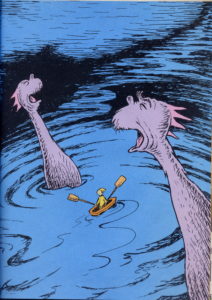 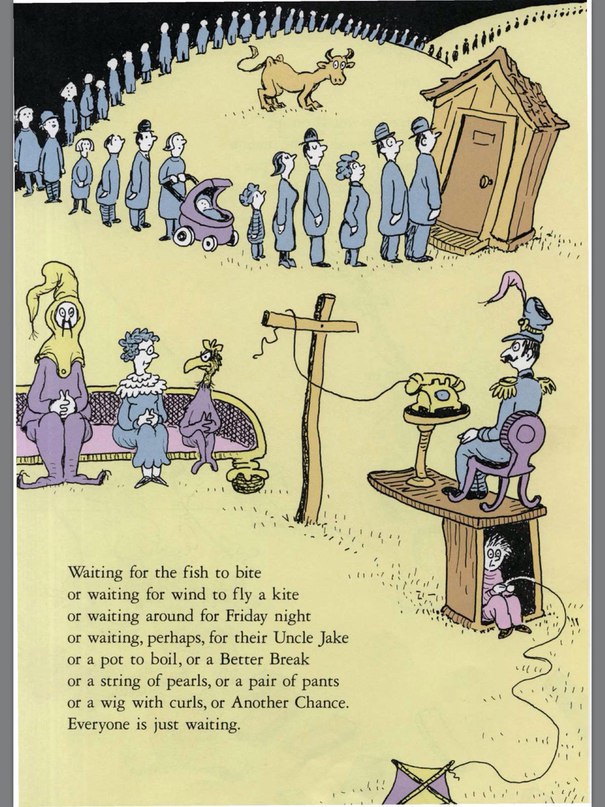 Could the “Waiting Place” have been Seuss’s version of Purgatory?

4) The “Waiting Place”: The last memorable (or unforgettable?) and haunting image of this book is the “Waiting Place,” another barren landscape with a midnight sky, an occasional bench, a curious military-like individual with a phone, a place where people from all walks of life just seem to be loitering around, waiting—but for what? Seuss gives some examples: a haunted place after. . . death?

Many of the items mentioned seem rather mundane, “a fish to bite,” “Friday night,” or a “wind to fly a kite,” among others. However, others are more interesting, “Uncle Jake,” “a Better Break,” and “Another Chance.”

Many theologians hypothesized that after death, those who were not quite ready for the Big Time, Heaven (but not so depraved as to go to the Other Place) would spend some time in Purgatory, or Limbo, to atone for their sins and purify themselves so they could move on to Heaven.

Could Seuss have been ruminating about his place in the Multiverse after his own impending death (he passed on one year after publication of this book)? Especially revealing are the references to a “Better Break” and a “Second Chance.” Reincarnation perhaps? The building that looks like an outhouse might be an extradimensional door, and the phone may be a connection to a Higher Authority.

Doubtlessly, most 5-year-olds would not see this page in these terms, though they might look at it as strange, perhaps haunting even. This page especially, as well as the book itself, would indeed be better suited to older audiences. Might this be Seuss’s version of an adult book? 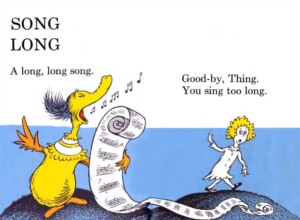 The strange song-singing Thing of Hop on Pop.

With far-out, fantastical and often barren, dreary landscapes, strange humanoids and even stranger “monsters,” rendered and colored in often dark, shadowy crosshatching and hues, much of Dr. Seuss’s work has a bizarre if not haunting aspect, at least to the average 5-year-old. The question remains, however: why would Geisel do this? The answer could be that he understood what King, Straub, Stine, Bradbury, and Jackson also understood, what Poe, the Brothers Grimm and thousands of our ancestor shamans and storytelling elders also understood as they gathered around their cave-mouth campfires, surrounded by the impenetrable darkness: that humans—especially children!—are intrigued by the unknown, the eerie, the strange, and the haunting. We know we were.