↓
Home→Brothers Kuhn Blog→Five Superhero Teams That Almost Could: Part I 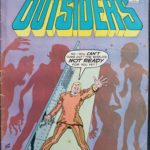 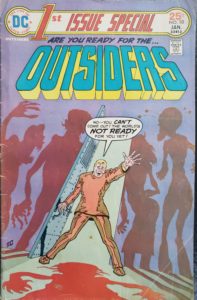 No, the world wasn’t yet ready for the Outsiders, at least the comic world…

Over the last fifty years, heroes have come and gone in lock-step with the times. Even more transitory are the ad hoc teams that were thrown pell-mell together but could never quite gel. What separates a Fantastic Four from a West Coast Avengers; or a Justice League of America from The Young All-Stars? The cowardly Lion might say, “Courage!” A rhetorical query to be sure, but listed below are several titles whose raison d’etre induces one to reconsider it.

1) The Outsiders (DC Comics: 1st Issue Special, No. 10, January 1976)
This one-shot hit the stands in the same month as Howard the Duck #1, Captain America #193 (King Kirby is back!) and “The Battle of the Century!” Superman vs. The Amazing Spider-Man. Alongside such noteworthy books, 1st issue special #10 would have remained untouched and unwanted—fated to have its cover summarily ripped off and sent to the supplier as proof of being unsold. 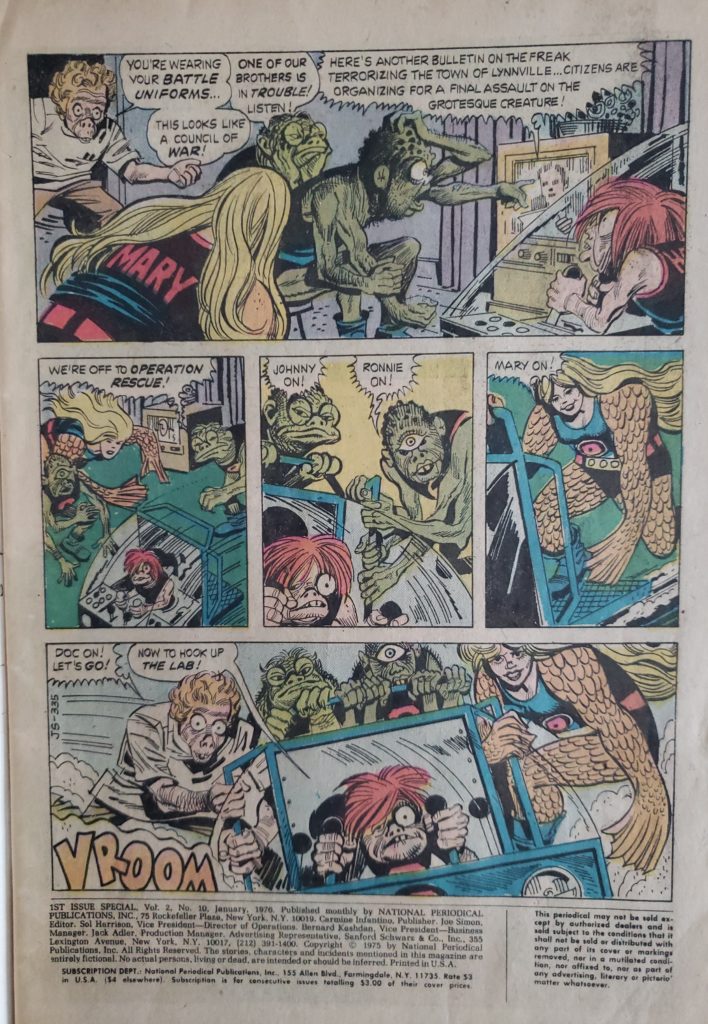 The Outsiders: Three pages in and readers are already hooked!

The 1st Issue Special series was DC’s vehicle to float trial ideas and characters. During its brief run, it featured such iconic figures as Warlord, Atlas, Manhunter, The Creeper, New Gods and Dr. Fate.

The Outsiders was written by comic veteran, Joe Simon (Captain America) and drawn by Jerry Grandenetti and Creig Flessel. The story capably presented all the elements desired in a first offering, namely, origin stories and the team’s incumbent rise into existence. The artwork and inks conveyed a distinct dark mood, apropos of the times and of a society crawling it’s way out of the morass of war, the oil crisis, and civil rights. Part of this synthesis meant revisiting the inherent discrimination towards those with physical differences. Up until then, such individuals were relegated to freak shows, circuses, asylums or shadowy places safely removed from a cookie-cutter society. 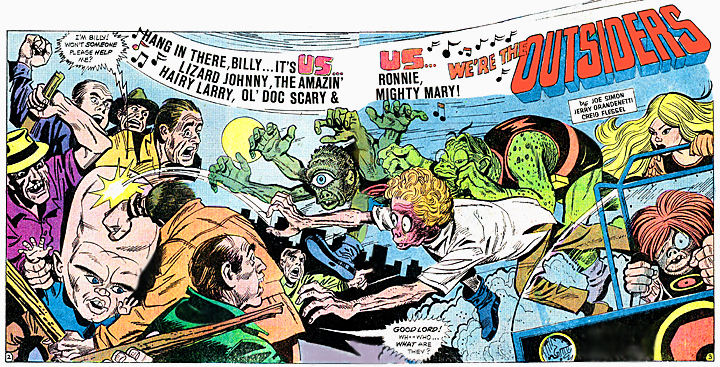 Simon wanted to bring to light the misconceptions surrounding freaks and to demonstrate that these individuals, however different physically, are essentially the same as everyone else. According to Simon, “We all want to be a little bit different than the next person; to have our own distinctive personality and appearance. But there’s a limit to HOW MUCH someone wants to be different.”

Hairy Larry, pictured above driving the team (mayhap a character inspired by the Odd Rod Cards?)

The story featured a unique blend of freaks, mutants and monsters melded together into a close-knit team: Doc Scary, their leader and a world renowned surgeon who had been remade in an alien’s image, “plasticized and mechanized a cybernetic”; Amazing Ronnie, with his single eye and four arms; Billy the Bighead Boy, whose dense head becomes a weapon in itself; Hairy Larry, integrated with his vehicle; Lizard Johnny, with poisonous bite and regeneration; and the super strong Mighty Mary. The team has their headquarters deep in the hospital’s sub-basement where they can exist in safety and make sorties into the world at large to rescue their own kind.

Although some of the team’s powers and talents were merely hinted at (with several of the character origins omitted), it would have been interesting to see over time how Simon would have fleshed-out their personalities—their interactions with each other and the world without. The Outsiders may not have been a big seller, but it was a cozy read. It imparted a warmth that few comics today are able to match. While such qualities don’t go far in the land of E pluribus Unum, the feel-good memories it left behind, are priceless.

NEXT WEEK: Top Hat time-machines back to the 70’s to revisit the Champions!