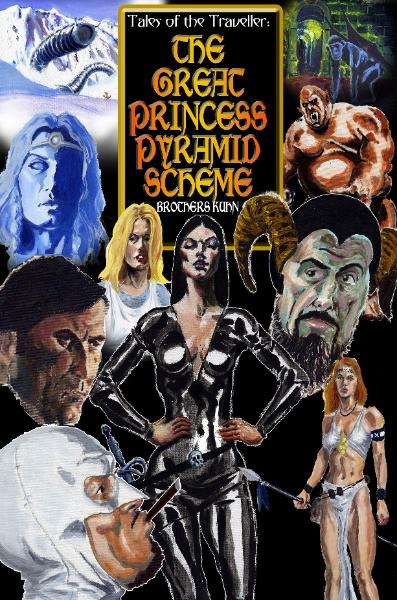 Two floors down from the majestic Cherubim and Seraphim, at
the end of the hall between the broom and utility closets, are the
Cognescentii, Shepherds of the Cosmos, pledged defenders
against the ever lurking, ever circling powers of darkness. Sent
into the universe in the form of men (albeit middle-aged,
sedentary, slightly lazy and paunchy men), these powerful
wizards are also afflicted with the same frailties and foibles that
afflict ordinary mortals.

One particular holy wizard of this illustrious order, known locally
as the Traveller, stationed on a small planet at the far edge of a
galactic backwater, is confronted with the mysterious abduction
of a neighboring kingdom’s princess by the local ogre tribes,
tribes that had long lived in a precarious peace with the
humans. Now, as our hero digs deeper to unravel this riddle, he
finds signs of other forces at work, forces far more ancient and
sinister than mere ogres. Can the Traveller rescue the princess,
discover the true instigator of these attacks, maintain the peace
and still finish the land survey he had promised the
neighborhood Emperor two years prior?

The answers to these questions are contained in this book, The
Great Princess Pyramid Scheme. Order your copy now