The Traveller, Teddy & Joe, Yorick, Tommy Rocket, and the Terrific Trio are channeled by the Brothers Kuhn. 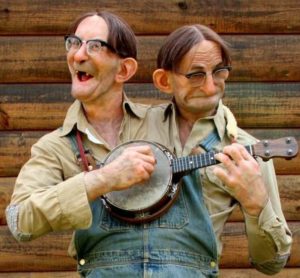 THE BROTHERS KUHN: Trying to hit just the right note for their readers for twenty years and counting (and sometimes even succeeding!).

The 1990s saw the formation of Top Hat Comics and subsequent publication of Tommy Rocket and the Goober Patrol, which, along with such memorable series as Illusha, She-Wolf of Lukas and The Terrific Trio, also introduced the Tales of the Traveller, which brought us the wily wizard in the first place. Now, the Brothers Kuhn have returned, reprinting these stories in a newly digitized format. In the months to come, expect to see the gradual return of all these old characters, as well as new tales of the Cognescentii wizard, the Traveller!