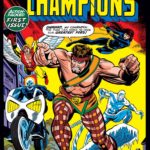 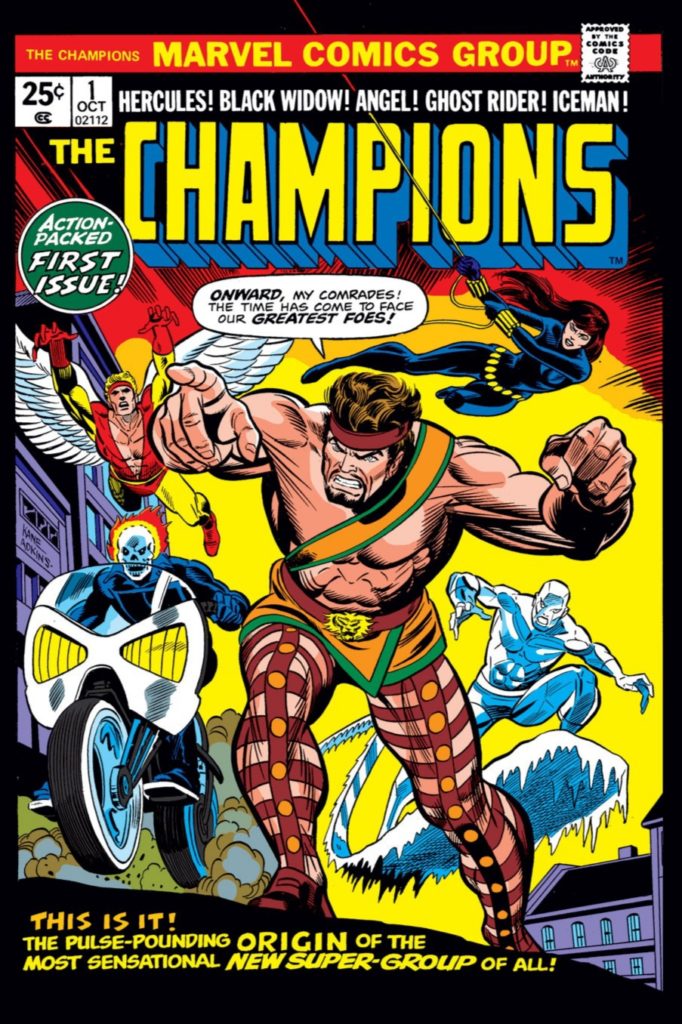 The Champions #1: Just goes to show that you really can’t judge a book by it’s cover!

This week, in our continuing examination of comic book super-hero teams that didn’t quite make it, we’ll turn from DC to arch-competitor Marvel, and the The Champions (October, 1975). Despite Gil Kane’s (typical) epic cover, and the à la carte collection of some of Marvel’s favorite superheroes, the series never gained traction. Their rationale for forming a team was expressed in their mission statement as put forth by the Angel: “… because the world still needs champions.” Evidently the world didn’t need them that much, as the series was cancelled after only 17 issues.

Comprising The Champions were the Black Widow (on the rebound after her stint with Daredevil—and now something of a megastar thanks to the miracle of CGI and butt body-doubles); Ghost Rider, who, since his tour with the ill-fated Legion of Monsters had been trying to latch onto any group that would have him; Hercules, the obligatory strong guy who was kept around as a means to perpetuate the titular rights to the Greek demigod and to perform acts of brazen stupidity: and finally the mutants Angel and Iceman, outcasts from a group of outcasts (how sad is that!?) replaced by the all-new, all-better X-Men, and in need for a book to crash. Darkstar was added later, largely to offset the testosterone ratio. 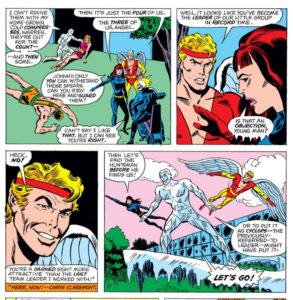 RISE OF THE BLACK WIDOW: The Black Widow not only had to wage battle against super villains, but also had to contend with male chauvinism. The Champions have the distinction of being the first superhero team to be led by a woman. Art by the semi-steady Don Heck.

The team was funded by—and apparently drawn to—Warren’s money, and just haphazardly fell in together (much like peanut butter and chocolate, but without the synergism).

As Hercules‘ dirty laundry and checkered past catches up with him, it spills over onto earth. Happenstance finds the aforementioned heroes conveniently collected on the campus of UCLA. Among the faculty is Venus—the AWOL goddess of love, defying stereotypes (dumb blondes) and Zeus himself. Olympus sics Cerebus and an assortment of mutants, and Amazons to reacquire her.

Their premiere issue leaves off with a cliffhanger. (Never a good idea!) An introductory story should be complete and concise with no loose ends or frayed edges. Their vow to form a team needs to be articulated. It is only when they put an end to Pluto’s machinations, three issues later, do they finally commit to become a team. 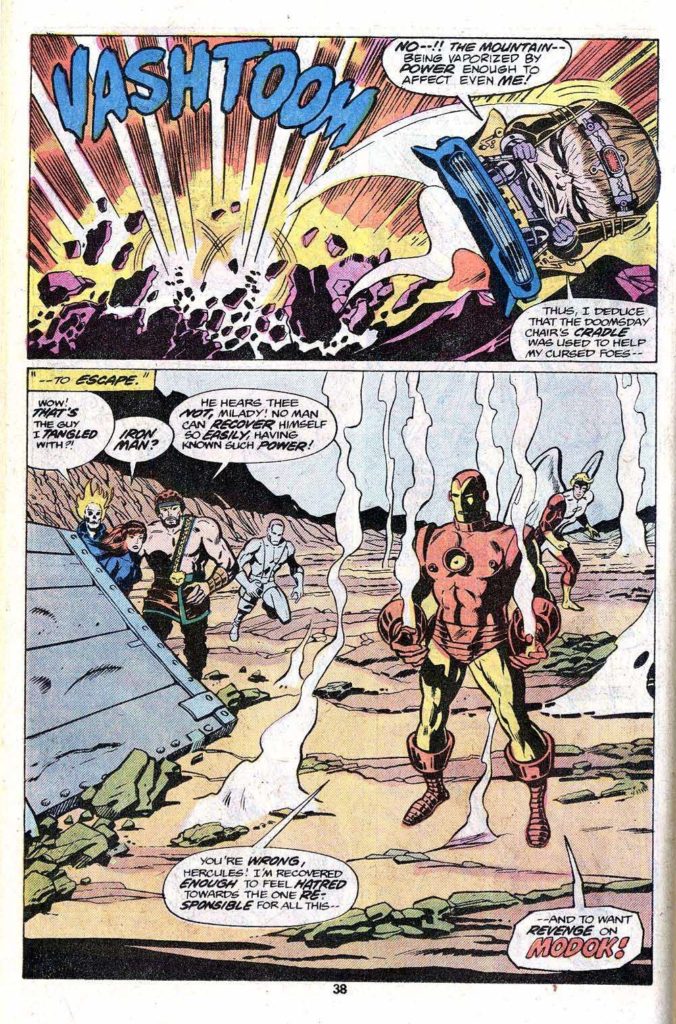 THE (DRAWING) POWER OF IRON-MAN!: To promote the book, the Champions had numerous crossovers. In the scene above, taken from Iron-Man Annual #4. the Ghost Rider stands with mouth agape drooling in astonishment at Iron-Man’s power to blow up mountains and maintain a successful comic title.

The series underwent numerous staff changes. Creative teams played musical chairs with one another to see who would be featured as the flavor of the month. In the end, the comic lacked purpose and direction. Its continuity and consistency had been compromised.

Tony Isabella’s original idea would have had the Angel and Iceman going on a road trip (`a la Easy Rider) and dealing with situations along the way. But his idea was shot down by the editors who opted instead to stick with the traditional formula: the tried and proven, the predictable and altogether tedious.

For many of us who remember scraping together 25 cents (a hefty sum in 1975) and picking it up at the local newsstand, the comic represented their first exposure to crass commercialism and of promises unkept.

Sorry Angel, but being unique and having power doesn’t always cut it.

As for the Champions’ legacy? How will it be remembered among comic historians? To date, it has the dubious honor as being the book most often held up “as an example of a failed super team comic…”, proof positive that there are no shortcuts to success, no algorithm for creativity, and no formula for a successful superhero team.

Nonetheless, after a long fight to regain rights to the name “Champions” after trademark abandonment, Waid and Ramos reintroduced the Champions in a 2016 reboot. Will the new Champions fare better than their predecessors? Time will tell.

NEXT WEEK: TOP HAT goes even further back in time to look at the T.H.U.N. D.E.R. Agents!