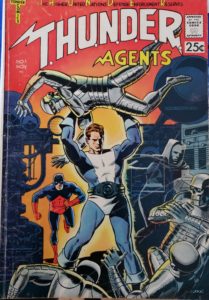 In our ongoing series of superhero teams that almost made it, we will now turn our attention from DC and Marvel to a competitor, Tower Comics, and their T.H.U.N.D.E.R. Agents, or ”The Higher United Nations Defense Enforcement Reserves.” You would think that under that impressive acronym, the series would have catapulted to the top of every fanboy’s list. Yet, despite the caliber of talent, (viz. Wally Wood, Steve Ditko, Gil Kane, George Tuska, Dan Adkins et.al.) the book never enjoyed or attained that rarified air of its contemporaries.

The characters were well-designed with awesome costumes, interesting powers, and catchy names: Dynamo, Noman, Menthor, Lightning , Raven, U.N.D.E.R.S.E.A. Agent , and Vulcan. Assisting the team was the T.H.U.N.D.E.R. Squad, who played a small yet vital role—largely as comedy relief. When a team of special U.N. agents reach the remote mountain laboratory of reclusive scientist Professor Jennings, they find him murdered and his laboratory ransacked. They also uncover various artifacts he has left behind, devices which give the T.H.U.N.D.E.R. Agents their unique powers.

HE LIKED TO PICK THINGS UP AND PUT THEM DOWN AGAIN–FAST!: Let’s face it, Dynamo liked to lift stuff. Another epic cover by Wally Wood . T.H.U.N.D.E.R.’s fan faves slug it out after the NoMan androids get hacked by Dr. Cyber.

Dynamo, a.k.a Leonard Brown, is provided with a power belt that increases his density, making him super strong and giving him near invulnerability. After 30 minutes, however, the belt automatically turns off to save wear and tear on its user. NoMan is an android designed by Dr. Anthony Dunn. Before the scientist died, he was able to transfer his consciousness into one of his many android bodies. He also possesses a cape of invisibility which can be used for short periods at a time. John Janus is Menthor, a double agent. This plot twist is made all the more complicated whenever Janus dons the Menthor helmet. Not only does it give him great mental power (reading minds, telepathy, and metal-bending, à la Uri Geller) but it also changes his alignment to good (hence the name Janus, of two minds). Eventually Janus undergoes a conversion and dies saving the team. Virgil “Guy” Gilbert is Lightning, who, when wearing the Lightning Suit, is able to move at freakish speeds, the only downside being that this also prematurely ages him. Raven was fitted with a jet pack and a set of wings that allowed him to fly. 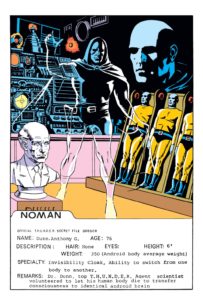 NoMan: enVISIONing the future: Antecedent of the Vision from Marvel, “The House of Other People’s Ideas”

The stories were imaginative and well-drawn. So why did the series never take off? Was it just a matter of being “in the right place but it must have been the wrong time” as boogie-woogie blues artist Dr.John might have sagaciously posited? Or were the stories fundamentally flawed—lacking in pathos and purpose? How to appeal to humankind without the human element? Perhaps there is something more than simply having a cool character, with cool powers. They certainly weren’t tragic heroes by any stretch of the imagination, at least not in the tradition of Spider Man, Iron Man, Batman, or the Thing. 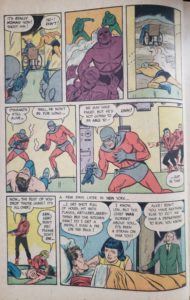 NoMention of NoMan. As if writing in a vacuum, the story that immediately followed made no reference to the “Dynamo vs. NoMan” event, nor did it reveal the fate of the book’s eponymous character.

It’s easy to play Monday morning quarterback and say what could have been done differently. Most of the books featured standalone stories written by freelancers that offered little in terms of continuity. These anthologies, according to the marketing gurus at Diamond Comic Distributors, are not very appealing to readers. In addition, the bi-monthly format at twenty-five cents a pop was a turn-off for most fans who needed to get their fix quicker (and cheaper).

In the end, the series was never able to turn the corner. After it was cancelled, it was passed around to other publishers–viz. JC Comics, Deluxe Comics, DC Comics, and IDW Publications and underwent endless reiterations. Despite the talent and money poured into these later editions, none have lasted longer, or have had the impact as the original twenty issues. Even now there is some talk about a film being made. Such talk however, should be taken with a grain of salt; another pipe dream—more hype than substance. But rest assured. In some shape or form the series will crop up again. Like insoluble fiber—the T.H.U.N.D.E.R. Agents has become the gift that keeps on giving.