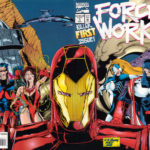 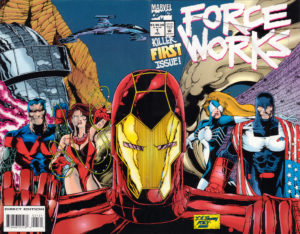 Under Tenney’s pencils, heroes never looked so grim (nor so constipated).

Formed from the deadwood of the West Coast Avengers, written by Dan Abnet and Andy Lanning; and uniquely illustrated by Tom Tenney and Ray Garcia, Force Works (FW) promulgated the interesting premise of combining Tony Stark’s sophisticated computers with the Scarlet Witch’s hex powers to create probability maps of potential hazards and threats. In effect a precursor to the NSA.

Tenney’s artwork imparted a unique style , evocative of Frank Miller, and Barry Windsor Smith, and was typical of the nineties where publishers were turning away from the traditional “house styles” that were de rigueur in the 60’s and 70’s. Tenney’s style was showcased in the very first issue with a larger-than-life sprawling cover spread, and, gauging from reader’s response, he was a big draw.

The series had a lot of promise, introducing interesting concepts and ideas such as the AI P.L.A.T.O. (Piezo-electrical Logistic Analytical Tactical Operator) a forerunner to J.A.R.V.I.S. hard light holography. and the Chaos computer . 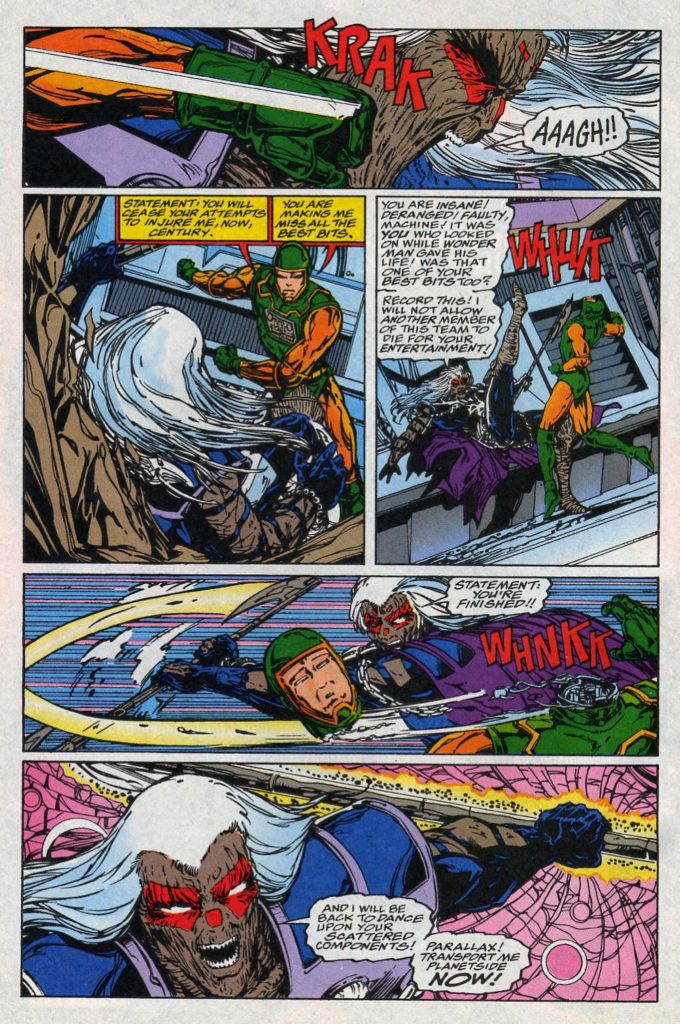 Led by Avenger veterans Iron Man and the Scarlet Witch, the initial team consisted of hanger-ons Wonder Man, Spider–Woman and the U.S. Agent, (an alien named Century would join them soon after).

Issue 1 begins with FW gathering ranks and debating amongst themselves whether or not to join Stark’s team initiative. Their debate, however, is cut short as an orbiting Kree warship opens fires upon them with an ion cannon. The cannon’s effects prove deadly to Wonder Man and the heroes are immediately thrust into battle. Complicating matters are the Scatter, an alien bug-like collective that spans the multiverse consuming worlds like inter-dimensional locusts . The Scarlet Witch uses her hex powers to repel the Scatter and in the process, inadvertently conjures up Century. 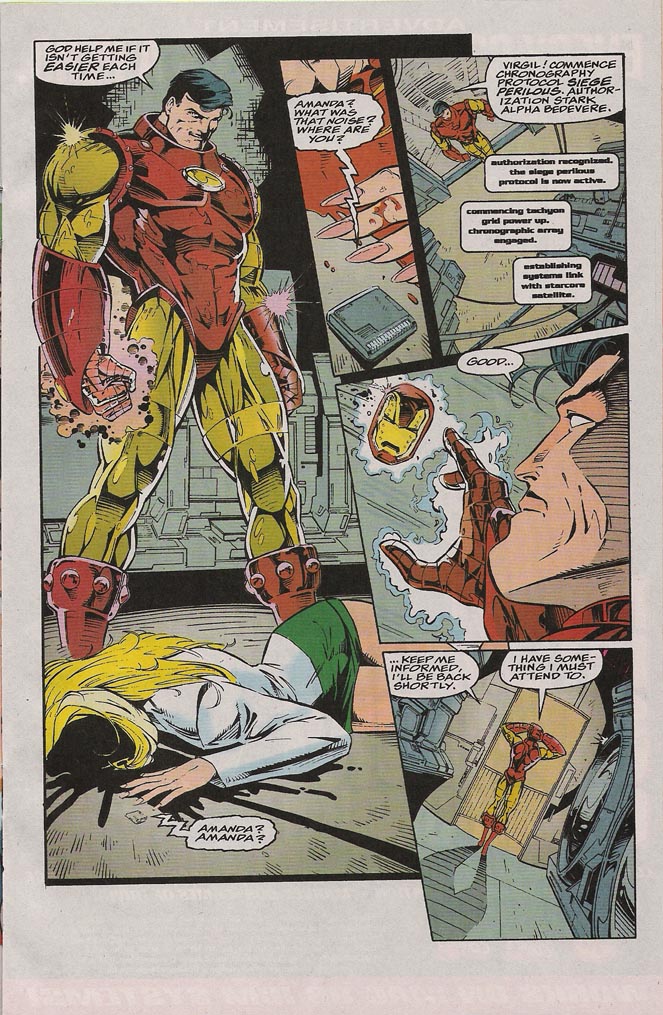 Stark raving mad? Not the first time Shellhead killed someone with his repulsor rays. Why isn’t this guy in jail?

Accompanying the Kree, in the role of universal observer, is a Recorder whose programming has become impaired. Like Hal from the movie, 2001: A Space Odyssey, he creates problems for FW later on. This Rigellian Recorder is not content simply to record events, he wants to take an active part in shaping them.

In the ensuing issues, The hex-mainframe computer leads the team through a gauntlet of super-villains and threats alike including: the Kree, Black Brigade, Volkvhy, Ember, Starstealth, the Mandarin and others.

Iron Man becomes non compos mentis, compromised by Immortus (or was it Kang?) and goes on a killing spree–funny that the Hex-Mainframe Computer couldn’t predict that!

Abnetts and Lanning’s carefully crafted plot twists soon began to fray and unravel as readers scrambled to keep abreast with the numerous crossovers into other titles: Avengers, War Machine, Iron man— boy-! if you missed one of those issues, good luck trying to figure out the plot!

By issue four, Tenny bailed and went to Image–presumably to inject prunes into some of their characters– and the series underwent numerous artist changes (no less than nine in a run of 22). Rey Garcia’s inks were the only thing holding it together–and that by a tenuous brushstroke. 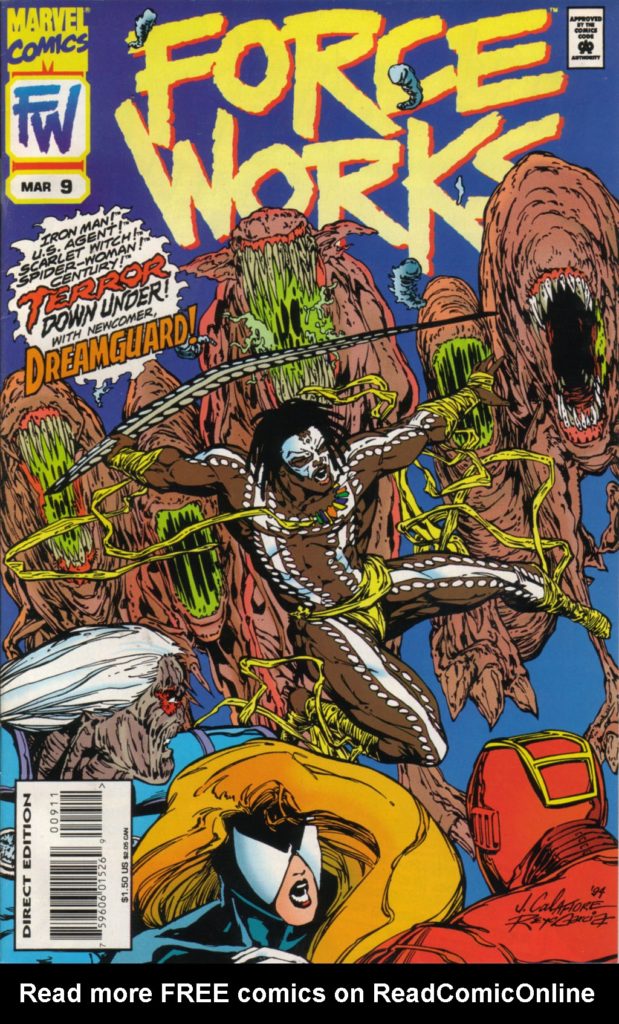 The enthusiasm and mojo that launched the book gradually petered out and the series went into a death spiral.

While it was refreshing to read stories that featured lesser known superheroes and develop stories around them– namely, Spider Woman, U.S. Agent, and Century— (in the spirit of Avengers#16) it was not enough to carry the series.

In the end, Force Works fell victim not to some otherworldly earth-shattering villain,  but rather that all-too familiar nemesis, the ultimate scourge of comicdom… “sluggish sales”.