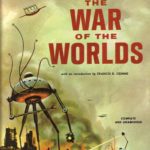 Every once in a while, a certain book will come along that has the shuddering effect of an atomic bomb at ground zero: the genre is altered and a paradigm shift occurs. From that point onward, the exemplar spawns analogs and variants, until eventually it becomes cliché and commonplace.

Such events occur rarely, yet when they do, they are especially noteworthy. Listed below are five sci-fi books which have had just such an effect on the literature of science fiction. 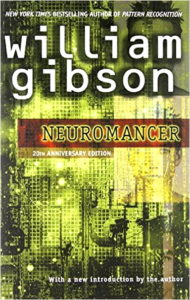 “He’d operated on an almost permanent adrenaline high, a byproduct of youth and proficiency, jacked into a custom cyberspace deck that projected his disembodied consciousness into the consensual hallucination that was the matrix.”

With those few sentences, William Gibson took readers down the rabbit hole of cyberspace—a term he originated well before the World Wide Web came into being, permanently terraforming the landscape of sci-fi. Gibson envisioned a dystopian future where technology is backdropped with the grit and grime of a society in disrepair. This noir dichotomy, where punk and hacker culture met—became known as the cyberpunk sub-genre and was unique in its day.

The protagonist, talented hacker “cyberspace cowboy” Henry Case, exists one step above abject poverty. Washed-up and shut-out from accessing cyberspace, Case must evade underworld elements seeking to rub him out. The hacker makes a Faustian Bargain—in return for access to the matrix, he is hired to unite two distinct halves of a thinking computing system—Wintermute and Neuromancer—and release the A.I. from the constraints imposed upon it by the Turing codes.

First in a long line of web and VR-based books, this theme has become universally widespread. Some notable titles include: Ready Player One , Snow Crash, Feed and the Otherland tetralogy . And of course, who can ever forget the movie, The Matrix? 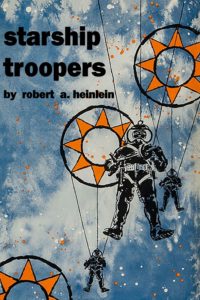 Although not the first book to feature a future fraught with armed forces (consider Uller Uprising), it is credited as being the “best-known example of military science fiction” and would become the template that other writers would later follow.

The book relates Juan “Johnny “Rico’s experience in the Mobile Infantry (M.I.)—from bootcamp, to eventual off-world combat. Robert Heinlein pits his armored jarheads against an alien race of Arachnids. To match strength with the “bugs, “the soldiers are outfitted with “powered suits” –exoskeletons that allow for limited flight, augmented strength, enhanced visual capabilities and devastating firepower.

“There are three main types of M.I. armor: marauder, command, and scout. Scout suits are very fast and very long-range, but lightly armed. Command suits are heavy on go juice and jump juice, are fast and can jump high; they have three times as much comm & radar gear as other suits, and a dead-reckoning tracker, inertial. Marauders are for those guys in ranks with the sleepy look—the executioners.”

Heinlein, himself a veteran, was a strong proponent of nuclear testing and penned this book to promote it. Ever thinking in terms of push and pull, Heinlein used his book as a sounding board to promote these views:

“Violence, naked force, has settled more issues in history than has any other factor, and the contrary opinion is wishful thinking at its worst. Breeds that forget this basic truth have always paid for it with their lives and freedoms.” 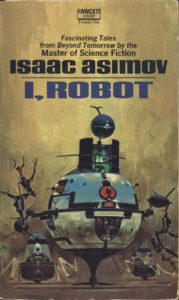 These laws, printed in the book’s preface, serve not merely as a primer for later Sci-Fi authors to emulate but also elevate the robot from the lowly status “of a mechanical golem bent on destruction,” to a sophisticated machine incorporating various degrees of A.I. Isaac Asimov’s I, Robot is a collection of short stories Asimov had previously published in Super Science Stories and Astounding Science Fiction. Together, they present a thorough examination of artificial intelligence and its resultant implications. This treatment came in consequence to the developing field of computer science.

In the story, “Runaround,” Gregory Powell and Mike Donovan, two field engineers working for U.S. Robots and Mechanical Men, are tasked with trying to figure out why the company’s robot is malfunctioning. As they do so, they impart to the reader a visceral sense that one can physically manipulate components and employ algorithms to diagnose and repair defective robots. Indeed, in crafting these stories, Asimov imbues his robots with a basic rationale, similar to the logic gates of a circuit board. As the book progresses, so too does the complexity of the robots, and soon the “positronic brain” is developed which allows robots to be self-aware. In the story “Little Lost Robot,” Dr. Susan Calvin, a robo-psychologist at U.S. Robots and Mechanical Men, Inc., must analyze a robot’s conflict between its sense of self-preservation and its innate programming not to injure a human being.

Worthy successors include 2001: A Space Odyssey, Do Androids Dream Of Electric Sheep?, Hyperion, City of Golden Shadow. The book was adapted into Will Smith’s successful film, I, Robot in 2004. 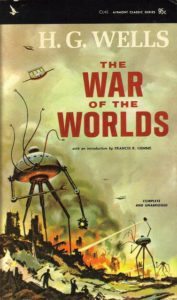 H.G.Wells’ seminal alien invasion story. A visionary, Wells’ great mind conceived the stuff that would keep the late Stephen Hawking up at night a century later. Wells put forth the concept of “extraterrestrials “as a species apart, inimical to the human race. In this early invasion literature, earth is invaded by Martians.

“Yet across the gulf of space, minds that are to our minds as ours are to those of the beasts that perish, intellects vast and cool and unsympathetic, regarded this earth with envious eyes, and slowly and surely drew their plans against us.”

Wells rightly understood the vastness of the universe and its potential for life long before the Fermi Paradox was postulated or the discovery of exoplanets made.

“Few people realize the immensity of vacancy in which the dust of the material universe swims.”

Wells‘ classic ending—with the Martians succumbing to earth’s pathogens—was a novel device in the late nineteenth century. (Although modern readers might find it hard to believe that an advanced civilization wouldn’t practice aseptic techniques-!). 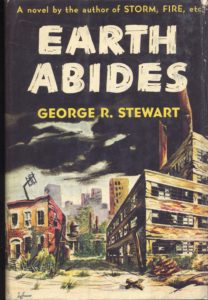 Post-apocalyptic literature by George R. Stewart. Graduate student Isherwood Williams awakens after spending two days recovering from a rattlesnake bite. As he makes his way back to town, he discovers that everyone has inexplicably died. The book artfully explores the collapse of civilization: its fragility and its rapid descent into chaos. As the central character manages to survive on canned goods, he is gradually joined by a few other survivors, and together they form a small, closely knit community. Ever closeted, they remain suspicious and wary of outsiders. When a stranger visits them bringing menace and disease, they must collectively decide how to deal with him. As the generations progress, a gradual erosion of accrued knowledge occurs, and a new world is birthed—atavistic and given to superstition.

Whether spurred on by the aftermath of WW II or the threat of nuclear war, post-apocalyptic literature became a popular theme. Some examples include The Day of the Triffids , Stephen King’s The Stand, and A Canticle For Leibowitz.

The Imaginations that produced these works left their indelible mark in shaping the Sci-Fi genre. As we are met with new technologies, concepts and scientific breakthroughs, stories will emerge that will continue to push the envelope of credibility and challenge readers’ imaginations. At the core of each of these revolutionary stories will be that one parent singularity, a special book so far out there, that it leaves its readers wide-eyed and dazed like a child looking up at the night sky, seeing the universe for the very first time.