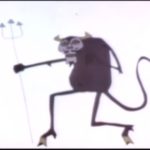 It’s a magic carpet ride
Every door will open wide
To happy people like you!

When Sesame Street first aired, its effect on society was fundamentally changing. Never before had there been a TV show explicitly tailored to preschoolers. Here was something unique—a panacea for mothers to plop their kiddies in front of and secure an hour’s rest. After its debut in 1969, the series rapidly mushroomed into an American institution, and by the mid-seventies it enjoyed tremendous ratings, and more importantly, robust merchandising. The show was especially treasured by that “pilot generation” of viewers, those crumb-crunchers who were still scuffing their knees and sucking their thumbs. For them Sesame Street’s appeal was something more than merely educational; it was a flight of imagination. Here children could get their daily dose of entertaining sketches—catchy songs and endearing muppets—all the while learning their precious ABC’s.

Yet for many Xers (that latchkey generation that came home to an empty house, without sitters or daycare) the show offered more. Concealed within the “sunny days” and the exhortation to “come and play” was a subtle undercurrent of something decidedly unsettling. These hapless kids were keenly aware of the cracks in that legendary street … and the nightmares that lay within them.

As Sesame Street prepares to celebrate its 50th anniversary, we’ve assembled a short list of segments that have left an indelible, if not disturbing, impression upon its viewers…

Wanda seen here with her sisters getting jiggy wit it.

W is for Witch, Wig, Wash, and… devil Worship?

What better way to get a kid to learn the letter W than to traumatize it into their frail psyches? We might have learned about the letter “W” more quickly if we didn’t run into the next room in mind-numbing terror every time this little short aired.

With frenzied discordant music and an urgent narration, this cartoon short was not merely “weird” (as Carol Burnett described it) but truly frightening. As Wanda the witch goes to wash her wig on a wintry Wednesday, a wild wind whips up and snatches her wig away—forever! The cartoon concludes with a coven of witches dancing around a cauldron and a haunting witches’ cackle, a deep throated cackle reminiscent of that of Mercedes McCambridge, the voice of the Demon in The Exorcist. Good times! 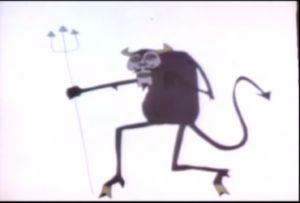 What’s a kids show without the devil in it? As with any subliminal messages, the devil’s in the details…

Three. That, kiddies, is the number of tongs on the devil’s pitchfork. The jazzy “number” cartoons are actually well done. The woman who rapidly sings the numbers (no less than Grace Slick of Jefferson Airplane!), does so in a captivating but frantic helter-skelter-fast mezzo-soprano voice. The visual transformations– from a three-headed dragon to a car driven by a dog with a lithograph of man and girl as passengers — occur without rhyme or reason. All these images are strange but not necessarily disturbing. But old Scratch—? 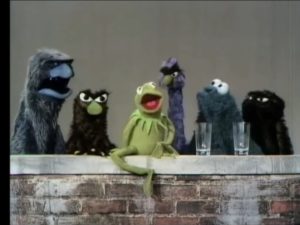 This fuzzy little scene had kids bed-wetting into their teens

Children have a heightened sense of empathy. They are able to relate vicariously to anything sentient—be it plant, animal, or mineral. So when kiddie fan-favorite, Kermit the Frog gets punked by a gaggle of monsters, junior at home feels his pain. Long before Cookie Monster morphed into the adorable cookie eater we all love and know today, he was something of an asshole. After he quaffs the glasses of milk Kermit was planning on using to teach “more and less,” the frog gets upset and proceeds to reprimand him. Eerie music begins to play as monsters ominously start gathering around Kermit. Chalk it up to the School of Hard Knocks. But boy, what a way to learn about “more and less!”

V is for Vampire…

Dracula-! An essential part of every school curriculum

And vigilante, vulture, volcano and villain. Not bad vocabulary for your average six-year old. But there’s a couple V-words they overlooked—vulnerable and victim! As like in the poor traumatized tike that had to watch this cartoon short ad nauseum. Death Wish anyone? 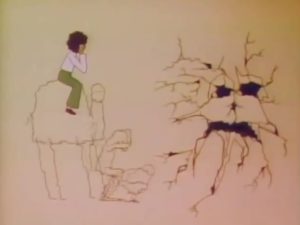 Homes and apartments built before 1978 may contain lead paint– or even worse — crackmasters!

On a rainy day, a young lady, lying in bed, gazes at a crack “overhead.” Slowly, the crack assumes the shape of a camel that invites her to go with him to visit other walls and other crack creatures. Behind a door, “in a corner”, they come across a rent in the plaster. Unlike the other cracks, this one radiates hatred and malice, and calls itself the “Crackmaster.” As the Crackmaster crumbles apart, consumed by its own hatred, one is left wondering, “WTF?!” If you’re a homeowner, this is the stuff of nightmares! 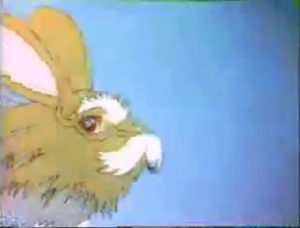 The cartoon begins with three kids running at full tilt; in the background, loud frenetic music is playing. The camera focuses in on the boy in the rear as he glances back. On his face is a look of stark terror. As the camera pans over we see the source of his fear. Hot on their heels and bounding with deadly intent, is what can only be described as a giant, mutant rabbit. Important lesson imparted to young viewers? Run or you will—DIE! 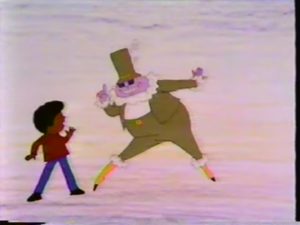 The inspiration for this skit was an actual dope pusher.

A bike ride down the street suddenly unfolds into a psychedelic Lewis Carroll-like bad trip. As the boy pedals ahead, he encounters bizarre and baffling scenes. His unease gradually increases, to the point where he finally exclaims, “I’m lost! I don’t like it here!” He is then met by a grinning man who oozes into being, dangling a yo-yo. This reality-altering segment has been brought to you courtesy of someone’s bad acid trip.

The Baby, the Ball, and the Clown 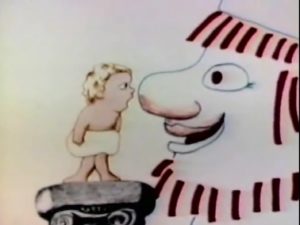 Was this bat-shit crazy short the inspiration for Stephen King’s IT?

The scene opens with a baby playing with a ball in a grey and bleak landscape. As he bounces the ball, it gets away from him and ends up perched atop a Roman column. The baby hatches the idea of climbing up a ladder to retrieve it. As he mounts the top, to his dismay, the ball rolls off the column. Shortly after, the ladder topples over, and the baby is left with no way down. He cries for help and a giant leering clown appears before him. This is the kind of creep you would expect to find hanging around playgrounds. Creepy with an ick!

Sesame Street was revolutionary for its time. The show impacted millions of children and was forefront in breaking down the barriers of race and culture. Since its halcyon days, the format has changed considerably, in lockstep with growing developments in child psychology. The controversial sketches of yesteryear have been replaced with the safe, sanitized pablum we see today.

And as for that test generation—those few who rode the cusp of something unique—how will they remember their formative years?
With fondness and warmth, and perhaps, just maybe, with the right amount of fear…

Can you tell me how to get—?