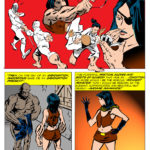 THE ABC’s OF ASSASSINATION

Now we see how Magorious has honed Manhands to be his ultimate weapon. “How can I kill you? Let me count the ways!” Last time we saw how Magorious began giving Manhands the basics of a rudimentary education, teaching her how to read, write, and to speak and conduct herself with confidence. Now, Magorious (with pretty deep pockets for a guy that doesn’t wear pants) has brought in the best masters of murder he could find to give Manhands the background necessary to be a premier assassin: ability with the sword, bow; excellent hand-to-hand combat abilities, and even the ability to disguise herself.

Perhaps most important, however, is his final gift to our strange outcast—the ability to disguise her freakishly large hands and feet. In doing so, Magorious not only gave Manhands a means to hide her strange mutation(?), but something even more important—the newfound ability to respect herself—he gave her self-esteem. With a simple magical device that allows her the ability to seemingly downsize a 19WWWW shoe by half, Magorious not only allowed her to fit into society, but to love herself, perhaps for the first time in her life.

And perhaps just as important as finally loving and accepting herself, Manhands can finally now have hope. No more, as she says, will she be “like a beast,” always worrying what the future may hold. Now she understands that Magorious (and their mysterious “master”) have great plans for her. What she may not yet fully understand, however, is for what? And why?

Indeed, Magorious has forged her to be a living weapon, but a weapon pointed against whom? Against the person sitting nervously on the other side of her hot tub—Nikki? Perhaps we’ll soon find out. Join me next time, honored reader, to see.

May the blessings of the Cognescentii rain gently upon you,