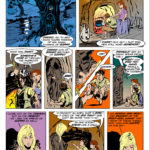 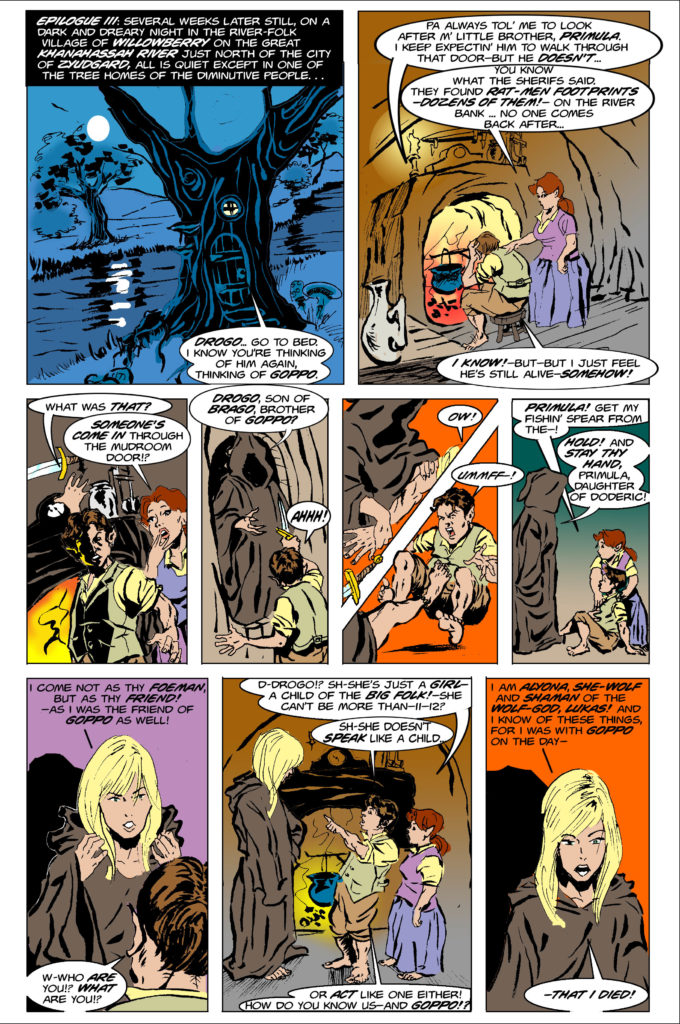 THE CURIOUS CASE OF THE REINCARNATING WARRIOR-SHAMAN (PART IV)

YOU JUST CAN’T KEEP A GOOD BARBARIAN DOWN!

The Eternal Chessboard of Good vs. Evil begins again to set its pieces in its ages-old battle. Evil again rises from the dust and rubble (as apparently Anasha has literally done, as witnessed a couple weeks ago HERE) and as Goppo also has, as seen last week.

Now, the side of Good also begins to stir in counter-action. Goppo’s older brother, Drogo, has been patiently waiting for his brother to return. And now yet another player enters the field of play—Alyona, the Warrior-Shaman of Lukas! (or so she claims).

What are the River-Folk to make of this child? She appears without warning speaking like an adult and displaying some nifty personal defense moves worthy of your ancient martial artists Bruce Lee or Bruce Tegner (take your pick!). But does that a legendary Warrior-Shaman make?

As longtime readers may recall, and as seen HERE, Alyona died defending herself and Goppo from Khakhatok the Ogre on the bloody slopes of Mt. Underkhark. At the time of her death, she cried out something most curious: “I shall fall—but live again!” At the time, we wondered if this was mere bravado or even madness…it appears it may be neither.

The Lukas Warrior-Shamans know of an ancient method to preserve their memories. As detailed in some extent earlier, the Alyona shamans could create an elixir from their own bodily fluids that contained their memories (and those of all preceding Alyonas as well). It stands to reason, then, that the elixirs only contained the memories of the Alyona up until the moment of creation. Sometimes the Alyona would/could create additional elixirs “on the road” (so to speak), as updates, to be found by under-shamans after her death. Did the previous Alyona have an opportunity to do so? If so, it means that some daring under-shaman (or shamans) had to have the nerve to retrace Alyona’s steps—into the Underwyrld—the land of the Nosferatu. It would seem that this is exactly what happened, since this new young “Alyona” (whose previous name before the Reincarnation Ritual was almost assuredly something else) knows that she was with Goppo on the day she died.

Has she returned now to avenge her own death as well as to aid Goppo’s family in learning of his fate? If so, they’ll have their hands full. After all, just what do we have here: two diminutive River-Folk who together barely tip the scales over 100 lbs sopping wet and a kid who looks like she should be down the street playing hop-scotch, skipping rope, or playing with her dolls—against what? The full horrid fury of Nosferatiya—the City of Eternal Midnight? And if they’re looking for Goppo (the real Goppo!), they’ll be sorely disappointed—if they even survive the encounter.

Let’s find out together next week, most honored reader, as we enter a new stage in the Saga of the Terrific Trio! Until then,

May the blessings of the Holy Cognescentii rain gently upon you!