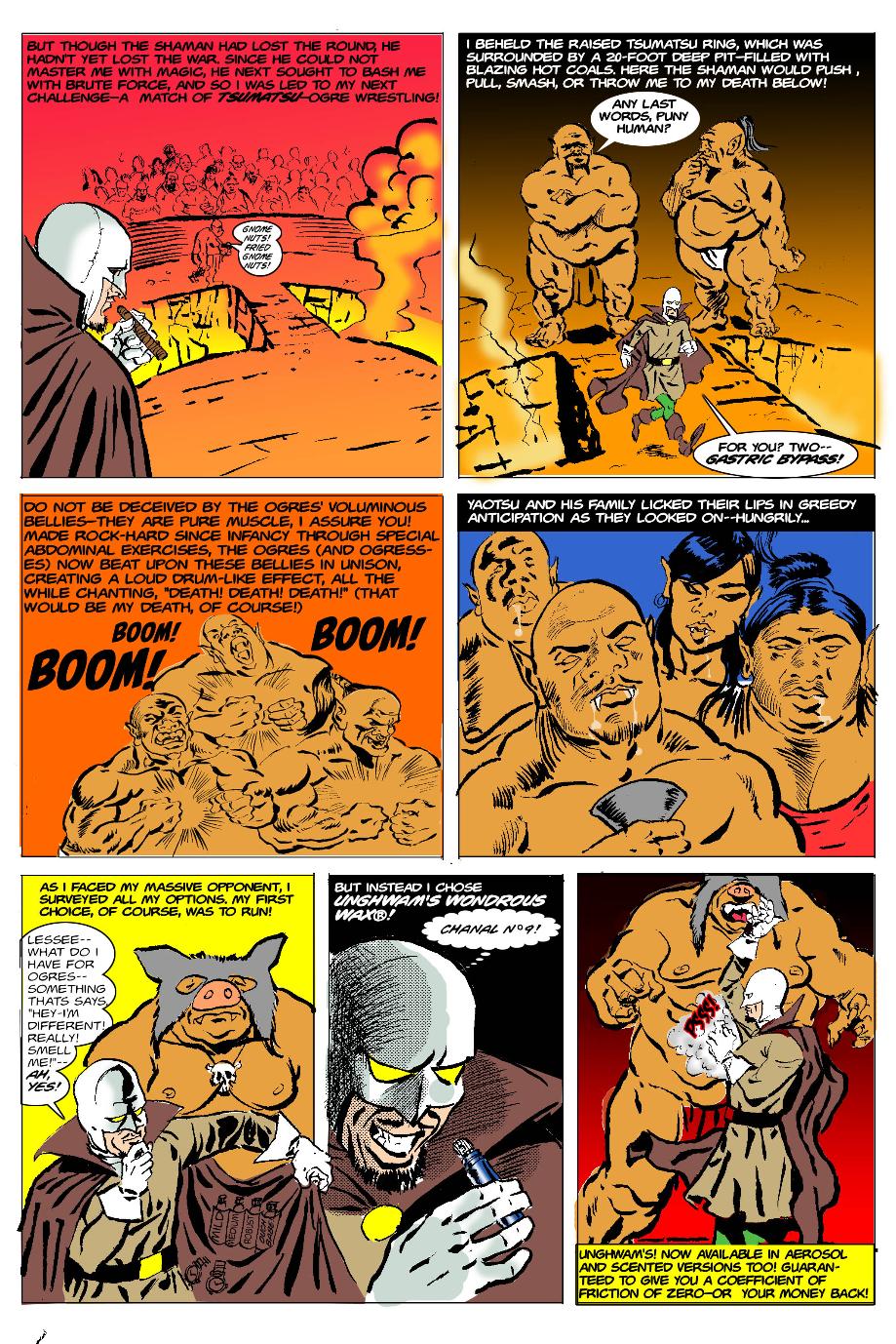 GOT SOME UNGHWAM UP MY BUTT! (AND OTHER FABULOUS COGNESCENTII PRODUCTS!)

Ah, Unghwam’s Wondrous Wax, one of my favorite Cognescentii mystical items. Welcome again, dear reader, to yet another strange transmission of the Tales of the Traveller! As you recall, last week I described some of the magnificent mystical tools plac-ed at the disposal of a Cognescentii wizard, Unghwam’s wax among them. Here are a couple more such items for your reading pleasure, as well as citations to when I used them:

Cognescentli’s Marvelous Mints of Mortification: These are breath mints in the loosest sense of the word. According to legend, some old Cognescentii long ago, known for his horrendous breath, sought to create the ultimate breath mint. Somehow, however, as often happens, something went awry, and he instead came up with the Mints of Mortification. For the user, they really have no taste at all, to be honest (or so I’ve always thought), but the fumes emitted for those around the user…well, just imagine the worst case of skunk roadkill you’ve every run across, mixed in with some of the worst feces and vomit you’ve ever whiffed, along with some rotten eggs and sulfur too—and even this description wouldn’t do it justice (at least according to the few survivors who were exposed to this magnificent malodor). For the worst thing about these min., and what makes them truly “mortifying,” is that while the Imbiber is immune, those in a 3-foot radius who happen to inhale his breath and the mint’s poisonous fumes usually succumb in several minutes. Though it’s highly classified, I strongly suspect there’s some type of nerve agent toxin involved with this product that becomes active upon contact with the atmosphere. But you didn’t hear me say that… (“On My Way Around the Corner in a Shopping Bag,” p. 2).

Potter’s Propitious Golden Parachute: For most parachutes, there’s only one direction—down (and hopefully in a nice, graceful, controlled descent Go!). But for Potter, who was always interested in new ways of getting about quickly (especially ways of getting out of town on short notice quickly!), this just wasn’t enough. Thus, the wily old Cognescentii wizard developed a parachute that envelops the user and his belongings in a protective warp field, allowing movement at speeds up to ten times the speed of light—in any direction too! In short, Potter had created the ultimate “get-out-of-town-fast” device. And I tell you, my friend, after foisting his famous Potter’s Perpetual Motion Machine on the unsuspecting inhabitants of one of the worlds he was stationed (as recounted and treated ad nauseam HERE ), he needed it too! (“On My Way Around the Corner in a Shopping Bag,” p. 4).

Figure 2: Wheel Me taking a spin in Potter’s parachute.

Perhaps you’ve wondered, dear reader, why I didn’t make use of Potter’s parachute and Motion Machine more often in my previous adventures? After all, wouldn’t it have made my travel here about the Wyrld easier? Certainly, but the Cognescentii often place tight restrictions on the use of these mystical items, depending on the local wizard’s experience, track record, state of grace, and, to be frank, what kind of mood they’re in that century. In my case, they took away the parachute shortly after my 500-year Probation Period on this planet ended. I can’t tell you how many times I would’ve appreciated the Golden Parachute since then. Alas…

May you have a wondrous week, dear reader! Until next week… Cognescentii blessings,