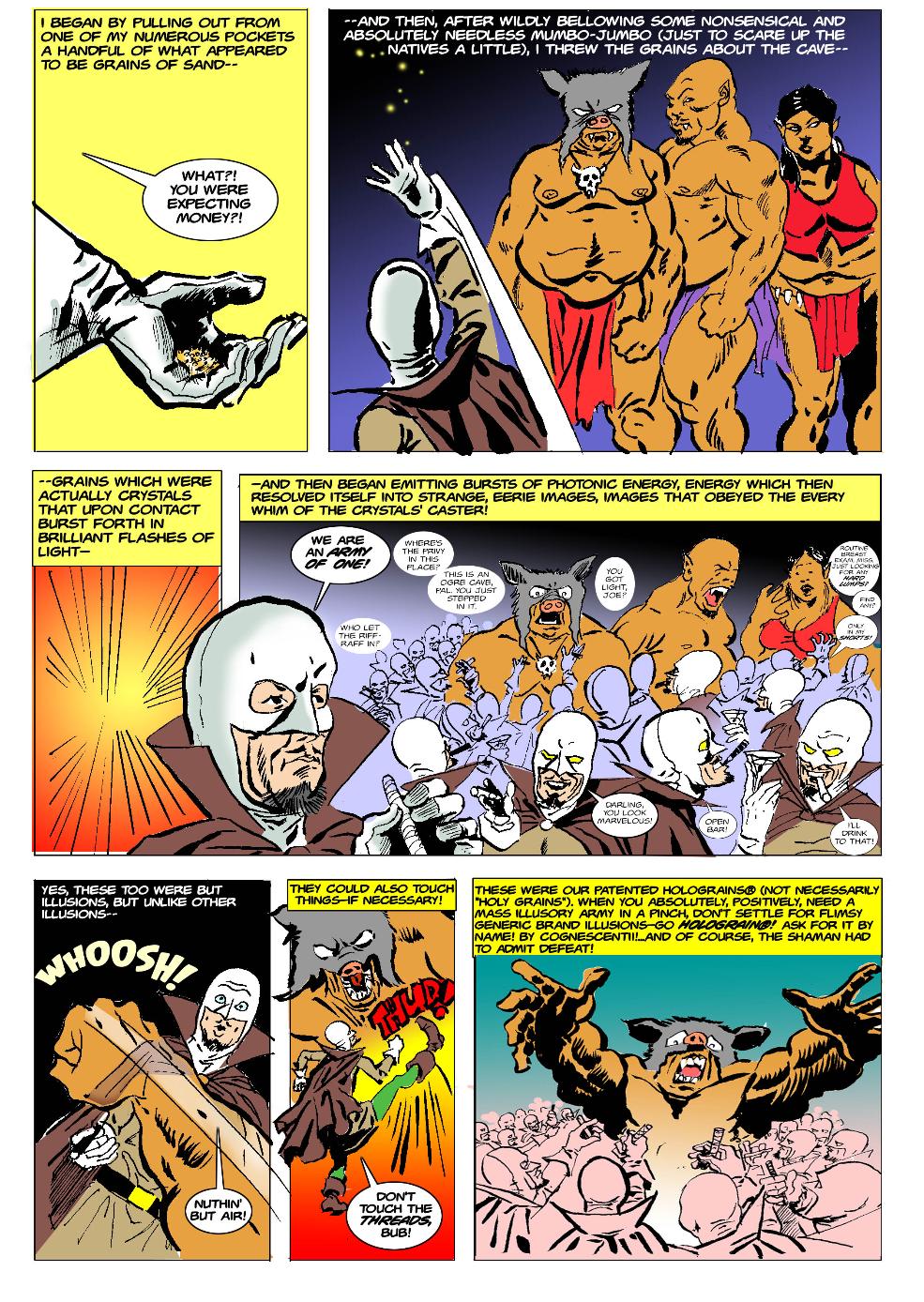 Welcome again to the pages of the Tales of the Traveller.

Those of you who are long-time readers have no doubt noticed the wide-ranging plethora of mystical Cognoscenti’ products I’ve conic to rely upon: Unghwam’s Wondrous Wax, Potter’s Perpetual Motion Machine, Tatu’s Tremendous Tanks of Infinite Air, etc. “But who in the Wyrld?” —you’ve also no doubt asked yourself—”arc these people” (Unghwam, Potter, Tatu, etc.)? Well, for the most part, they’re just other Cognescentii wizards, who having seen a need, created a new mystical product to meet it.

You see. dear reader, among some of the other vexations of being a wizard of the All-Holy Cognescentii, is the fact that a Cognescnetii wizard is strongly pressured (by Those Above) to come up with new tools to help his fellow brethren. Just as in the world of academia on your planet in the 21st Century of the 14th Eon, professors must do research and get published to “survive,” so too must the Cognescentii wizard produce to survive (that is, if he doesn’t want to be asked to resign his wizardship at an early stage of his career in disgrace).

Thus, we get some of these marvelous Cognoscenti’ tools, inventions, and yes, even weapons. Some of them are placed at our disposal by the Higher Council of Cognoscenti’ and are. as such. “generic,” or “no brandname,” so to speak, for example the Holograins seen in today’s transmission, our patented Mystical Power Drinks (one of my favorites!), and of course. our ultimate super-weapon/ tool, our mystical reality-altering flavoring particles. Yet many other mystical items are bequeathed to us through the industrious research and cog-nition of other Cognescentii wizards. Below is a partial list of some of the mystical items seen so far on these pages, as well as citations as to when they were used:

Qualoo’s Portable Well: This little gem of a mystical device appears as a small well with a wooden lid that can be closed to allow portage and storage; it is, in actuality, however, a nexus to a world (or entire plane—even we’re not sure!) of nothing but water. It’s great if you ever find yourself stranded in some godforsaken, endless desert as it’ll provide the owner not Just with an endless supply of potable water, but an endless supply of fish as well! There’s one caveat (but it can be a big onol) to using this well. The fish from Qualoo’s well are also hungry and can range in size from some exquisitely tasty (with onions!) trout-analogs to others that make your modern-day blue whale look like a tadpole. These. fortunately, can’t make it through the portal, but others can: one stunned fisherman once hauled in a small fish whose viciousness would make your piranha look like a puppy. Qualoo himself was last seen being hauled into his invention by a tentacle the diameter of a big man’s chest (about the diameter of the well). In short, it’s not always clear who’s fishing whom with Qualoo’s well “A Grief with Crocs” page 1

Tatu’s Terrific Tanks of Abundant Air: This marvelous mystical item (also known affectionately as Tatu’s Tremendous Tanks of infinite Air) opens a conduit to a world (or entire dimension, for all we know) filled with nothing but breathable air. However, the pressure on this other world is much higher than on most worlds in our universe. Thus, even a small aperture will pro-duce a mighty gust of wind. By increasing the flow, one can create airflows ranging from a gentle breeze to a blast so powerful you could use it to sandblast. Generally speaking, Tatu’s air is great when used in conjunction with ships or other modes of transport (though it” s great for party tricks too…)
(The Wizard and the Wager)

Unghwam’s Wondrous Wax: Of all the wizards described in this transmission today, only Unghwam came from the planet where I was stationed in today’s story, the Wyrld. Unghwam, however. was my predecessor. stationed on the west side of the con-tinent. just as I was. In his illustrious career here. Unghwam (for God knows what reason) decided to carry out a thorough examination of this planet’s massively giant Snow-Wynn and discovered that the creature’s subcutaneous. epidermal oils displayed a remarkable degree of slipperiness. Thus, Unghwam’s wax, derived from this substance, confers a coefficient of friction of zero upon whatever it is applied. Again, this substance is great for transport…but it’s also great for party tricks too ( The Great Princess Pyramid Scheme, p. 4).
Now, you’re no doubt asking yourself, “Well, fine, but where’s your mystical invention or achievement? Where’s the Traveller’s Tremendous Turbine, or Traveller’s Terrific Gin ‘n’ Tonic, etc.?” Well… (awkward, embarrassed silence)… I’m still working on that…but I hope to have something soon.

Ah, honored reader, time for me to go now. May your week be a pleasant one!