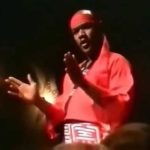 A  RETRO-LOOK AT THE MARTIAL ARTS CRAZE THAT PERVADED WESTERN CULTURE IN THE EARLY AND MID-1970S:

“Everybody was Kung Fu Fighting
Those kids were fast as lightning
In fact, it was a little bit frightening
But they fought with expert timing!” 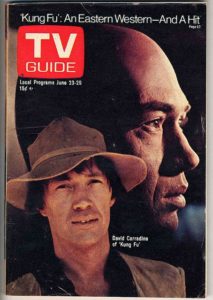 TV Guide (June 23-29, 1974): Nothing says success like getting your picture on the front of TV Guide. We used to collect these things and root through them more thoroughly than a monk through his holy books. We had to know when Kung Fu (and our other programs) were coming on!

Indeed, in the heady days of the early and mid-1970s, it seemed as if everybody was Kung-Fu fighting, as a powerful martial arts craze took the West, particularly the United States, by storm. The Kung-Fu fad burst onto the scene with all the force and fervor of a kendo kick to the head. In the early ‘70s, every kid  imagined himself a Kung Fu master, delivering righteous kicks and lethal blows to his enemies, friends, family or whoever else got in his way, be it plant, animal, or mineral. It was a period where roundhouse-spinning, back-flipping fools abounded around every corner, more often than not doing more damage to themselves than others.  Martial arts’ appeal to kids was more than merely physical: there was a mystique to it. An unknown quantity. Suddenly with a few lessons, even the most average kid could give pause to the nominal school bully. 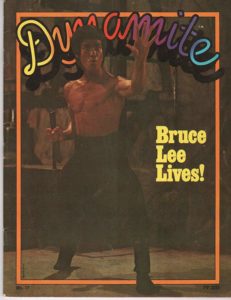 Dynamite #17: (Nov 1975): Even though he had passed away 2 years earlier, Bruce Lee still lived in the hearts and minds of Americans, as seen in this Dynamite cover. As kids, we would sacrifice our lunch money to buy one of these Scholastic publications! 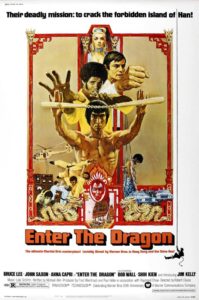 Enter The Dragon (1973): The movie release poster for a film which Lee himself would never see, a movie which helped popularize Chinese martial arts in the United States and cemented Lee’s legacy.

As most fads go, this one also received a healthy push from Hollywood. Two films hit the theaters in 1973 that proved pivotal to the martial arts genre: Five Fingers of Death and — Bruce Lee’s magnum opus, and final film– Enter the Dragon. The advertisement and promotional budget for the latter movie reportedly exceeded a million dollars– unprecedented at the time– yet it was money well spent as the film grossed $25 million and cemented Lee’s legacy (he passed away that same year). The Kung Fu Television series (1972-1975), starring David Carradine, combined the old west with martial arts. It proved very popular during its short run. Each week, viewers tuned in to watch a Shaolin monk pit his Kung Fu prowess against the outlaw’s gun.

The toy industry too was quick to capitalize on the success of the film industry. When Big Jim wasn’t camping out with Big Josh, he was working out in his Kung Fu Studio. With a furtive press of a button, Big Jim could send a mini-plastic board splintering to the floor. (I guess you had to be there.) And, in 1974, G.I. Joe and his Kung Fu Grip appeared on store shelves… now he could strangle VC with the flexible fury of his rubberized digits. Go JOE! 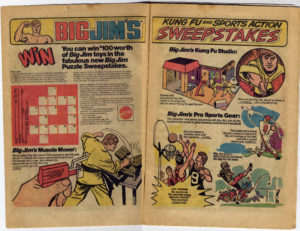 One of the many Big Jim action figure advertisements that filled the interiors of comic books in the mid-70s. Having seen Big Jim and his Kung-fu Chop action arm–we just had to put that on our wish list!

The word “Kung Fu” had already entered popular culture in America so the general idea of “Kung Fu” grip (one hell of a grip!) was plain to every kid. And yes, this is our actual G.I. Joe box!

Comics soon appeared on the racks that embraced the martial Arts culture. Marvel introduced Shang-Chi, Master of Kung Fu in Special Marvel Edition #15 (1973) and Iron Fist in Marvel Premiere #15 (1974). Old school superheroes were caught off guard. They had to readjust their methods to deal with the surfeit of martial artists: Moon Knight, Daughters of the Dragon, White Tiger, Sons of the Tiger (there wasn’t a zoo big enough to contain them all!) Even Spidey was griping about them. (see below). 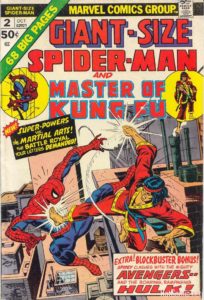 Giant-Size Spider-Man and Master of Kung Fu #2: (May 1975): To be honest, when we saw this, we simply had to have it! Frankly, we really expected Spidey to hand Shang-Chi his butt in a cup. . . 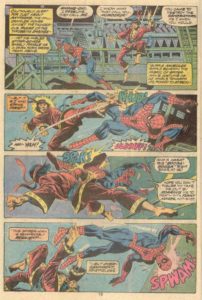 … Imagine our surprise when he not only held his own, but even put Spidey on his back foot! 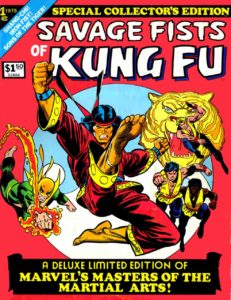 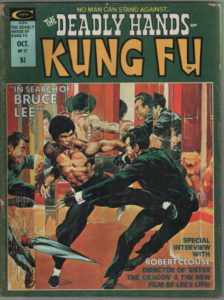 The Deadly Hands of Kung Fu #17 (Oct 1975): The world was still searching for Bruce Lee two years after his death. Marvel capitalized on the Kung Fu craze with this line of B&W magazines which featured not only its own characters but interviews with martial artists and celebrities. 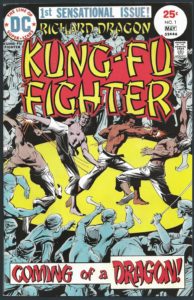 Richard Dragon Kung-Fu Fighter #1 (May 1975): The Distinguished Competition also jumped feet first into the martial arts craze with its answer to Shang Chi in Richard Dragon.

Eventually, like the Monster Craze it replaced and like almost all fads and crazes, the Kung Fu craze also ran its course. Iron Fist and Marvel’s premiere magazine The Deadly Hands of Kung Fu ended publication in 1977. DC’s Richard Dragon Kung Fu Fighter, first published in 1975, also folded in 1977. Shang-Chi lasted a little longer due in large part to Doug Moench’s remarkable scripting.

But by 1983 it too faded into the Asian sunset. Indeed, Kung Fu’s decline in culture would not come from some rival clans or bandits, but rather from a galaxy, far far away… with the emergence of an all-new, all-different, paradigm shift.

The true impact of the Kung-Fu phenomenon is immeasurable. Its affect on pop culture–from dojos to visual media–would prove enduring. Hopefully this article will encourage its readers to scrounge through their parent’s attic, dig out their old yellow belt, and knock out a few katas. If, however, Grasshopper, your body should protest, we recommend doing what we intend to do: sit back in the lazyboy with your favorite beverage and binge watch on Kung Fu.