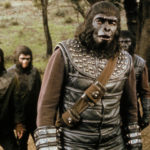 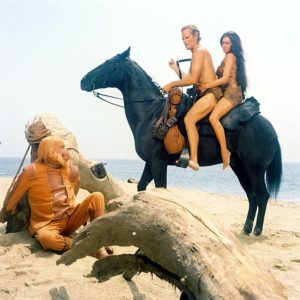 With the success of Matt Reeves’ reboot of the Planet of the Apes series (most recently, War for Planet of the Apes this past summer), it’s worth remembering the seed from which this franchise all sprung, the original movie, The Planet of the Apes (1968), which was based on a book written by French author Pierre Boule. His book, entitled, La Planete des Singes, was a noteworthy work in its day (1963). The original twist was that astronauts visit a planet in the Betelgeuse star system where the roles of men and apes are reversed. In the book, man’s intellectual demise is the result of complacency, of a willful “dumbing down” if you will (think: iPhone), rather than disease or genetics. The central character Ulysse Merou (changed to Taylor in the film) returns to Earth with Nova, escaping the planet with assistance from Cornelius and Zira, only to find that the same phenomenon has occurred back on earth.

Usually Hollywood botches up the job of bringing books to the big screen. However, listed below are several instances of where the movie departs from the book, and improves the story considerably.

The astronauts awaken from their cryogen tubes and find the desiccated remains of one of their companions, the implication being that a great deal of time has passed since their departure. The ship’s clock indicates that two thousand years has passed—time enough to allow for a race of apes to establish a society without the vestigial remains of a human civilization. And while Boule employs time dilation, the effect is muted. 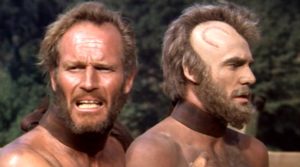 “Um…can I have a different barber?”

The author alludes to lobotomies and other experiments performed on humans, in direct role reversal. Ulysee’s reaction in the book when Zira casually touches on the subject is one of horror, outrage, and disgust. However, the movie takes it up a notch by having Taylor discover Landon; the powerful, visceral image of the lobotomized astronaut is striking. 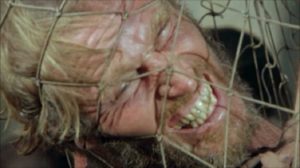 “Take yer stinking paws off me! I’m not that kind of guy!”

The movie cleverly conceals Taylor’s ability to speak by having his throat injured in his struggle with the apes. When he is at last cornered and caught, he yells hoarsely, “Take your stinking paws off me, you damn dirty ape!” Those immortal lines leave the apes speechless and astonished… while
Zira looks on with a smile of delight.

In the book, because of the language barrier between man and ape (set in a different world rather than a different age), the book’s treatment is a long and protracted one, underscoring Ulysee gradual learning the apes’ language. As a result, the impact of seeing a talking human is anti-climactic. 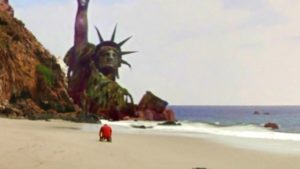 “Get yer lazy, tired, good fer nuthin’, poor, huddled ass off the couch and help get me out of this quicksand!”

The climax of the film is also much more memorable than that of the book. At the end of the film, Charlton Heston cries, “ You maniacs! You blew it up! G- damn you! G-damn you all to hell!” as the camera gradually pulls back, revealing the ruins of Lady Liberty.

However, that iconic scene, which we all are familiar with, never even appeared in the book. Rod Serling, (creator of the Twilight Zone) added it in the screenplay he wrote with Michael Wilson. For the audience—thoroughly entrenched in the Cold War—this was indeed a sobering image (can you say “redux “?).

Most science fiction has a limited shelf life. As with any good sci-fi story, it is less dependent on special effects or even necessarily hard science but rather good character development. The interaction between Zira and Ulysee (Taylor), the hierarchy of ape society viz. gorillas, orangutans and chimpanzees, and the undertones of race ( simian vs. homo sapien) assure that Pierre’s book will continue to remain a relevant work of fiction even into the 21st century.