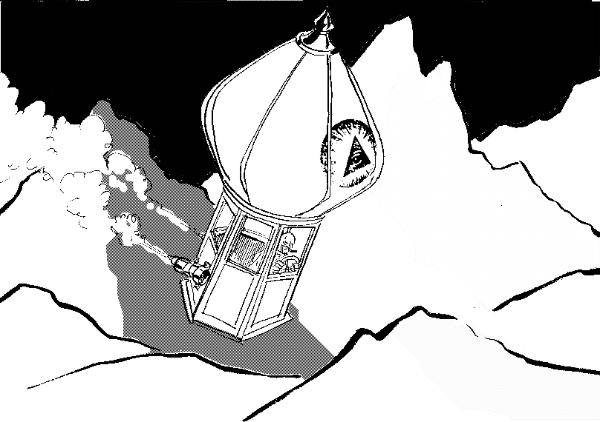 I had already passed my 500-Year Introductory and Assessment Visit (or Meet and Greet Tours, as I like to call them) of all the Wyrld’s major peoples, but I hadn’t yet had a chance to meet up with the planet’s largest humanoids, the Titans, aka, the Sky-Giants. Long ago, they were an extremely warlike, aggressive race that had almost conquered the entire known Wyrld. They would have succeeded too had it not been for the timely intervention of the gods, who as punishment, confined the Sky-Giants to this faraway and deep valley nestled high in the Great Central Mountains. My predecessor had visited them centuries ago, but the Cognescentii wanted me to assess the current mood among the Titans. Were they still as aggressive as they were? Did they still harbor plans to escape this great valley to take revenge for their loss and imprisonment? My mission was to discover whether the Sky-Giants, once an extremely proud and aggressive race, still held pretensions at escape–and Wyrld conquest.

Having already passed the 500-year mark in which to conduct this Introductory and Assessment Visit, the Cognescentii prohibited me from using Potter’s Propitious Golden Parachute to reach the faraway and nearly inaccessible Vale of the Titans. Thus, I was forced to devise an airship using Super-Helium, a Cognescentii-created gas with 90% greater buoyancy than even hydrogen (and without the combustible properties to boot!). Even with Tatu’s Terrific Tanks of Abundant Air, I was having great problems staying on course through the treacherous peaks and gale-force blizzard winds.

Nonetheless, I finally reached the interior of the massive valley, one of the largest and deepest on the planet as it is surrounded by sheer peaks even higher than your own Mt. Everest. Any Sky-Giant attempting to scale these peaks would need to somehow overcome nine-mile high sheer cliffs. The only other entrances to the vale are the Great Tors (only two of them) constructed by the gods, but any Sky-Giant passing so much as a toenail beneath them would immediately attract the attention of said-gods. Thus, these greatest and most magnificent of the giants, the Titans, are effective prisoners in a valley roughly half the size of your country of Luxembourg (at least as it existed at the beginning of your 21st century). Upon descending into the valley, my mystical instrumentation informed me that air pressure increased (becoming breathable again) as did ambient temperatures. Indeed, though surrounded by some of the highest and most inhospitable peaks on the planet, the vale itself was nearly subtropical in climate.

I located the area of the royal castle and set forth to the overgrown areas behind its yards. I would use this as my staging area while I made contact with the Sky-Giant king. I wouldn’t want one of them to accidentally come across my airship (which also contained my cleverly-disguised Time-Space machine).

However, as I glided down towards a relatively inaccessible island in the middle of a small boggy pond, two extraordinary sights immediately caught my eye: one was the 50-foot plus girl–a Sky-Giant maiden! The other was the 40-foot long giant serpent that had slithered up on the grass before her, frightening her.

The giant maiden was too frightened by the snake to see me. On the other hand, as soon as I understood what the situation was about, I had to chuckle to myself. Strange to say, at that moment, wēi jī , your ancient Chinese word (ancient to me now, anyway) for “crisis” popped into my mind. You see (as one of your ancient leaders also noticed), this word is a combination of the words “danger” and “opportunity.” This poor maiden’s crisis was a danger to her, but for me it presented a golden opportunity. Besides, saving maidens in distress was just the Cognescentii thing to do. 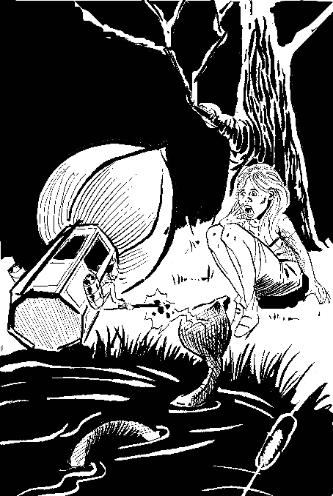 My airship noiselessly glided down behind the serpent, and I just as noiselessly opened up the side door, leaned out with my mighty Staff of the Cognescentii, and let loose with a near 1,000,000-voltage blast into the water, stunning not just the giant serpent, but likely whatever else was dwelling in the murky depths of that pond.

The girl glanced up at me with a look of utter shock and incredulity. Finally, she gathered enough wits to speak: “T-thou didst save me from the poisonous swamp serpent, b-but who, or what art thou? Art thou a human?” This she uttered in the speech of the Sky-Giants, of course.

“Nay, Milady, I am a wizard of the Holy Cognescentii, come to the Vale of the Titans to renew the ancient peace between my Order and thy great race,” I immediately answered, using her own tongue.

“Men call me the Traveller. I am a wizard of the Order of Wizards known as the Cognescentii. I come to speak with the King of the Titans.”

“Then, little wizard, thou hast come most timely to the correct personage, for I, Vilahillariana, am the daughter of the Sky-Giant king! Come with me, and I shall introduce thee to him and his court.”

I immediately acquiesced, thanking the Princess profusely. This crisis truly was an opportunity for me, for by saving none other than the Sky-Giant King’s daughter, I had created a bond of obligation with the most powerful of the Titans while also presenting a strong sign of peace.

After landing my airship behind some tall grasses on the small (but relatively distant) island in the pond (which was really just a glorified hummock), I took out and unfolded one of my Cogni-Boats from storage and quickly sailed over to the Princess at the edge of the pond (who was still eyeing the unconscious giant serpent with horror). Then, before I could even so much as get out of the boat with plans of hiding it among the tall weeds and grasses, the Princess took hold of it with both hands and almost effortlessly bore me and the boat up out of the water. We then set off for her father’s castle that I had seen earlier. My plan thus far was working to a tee.