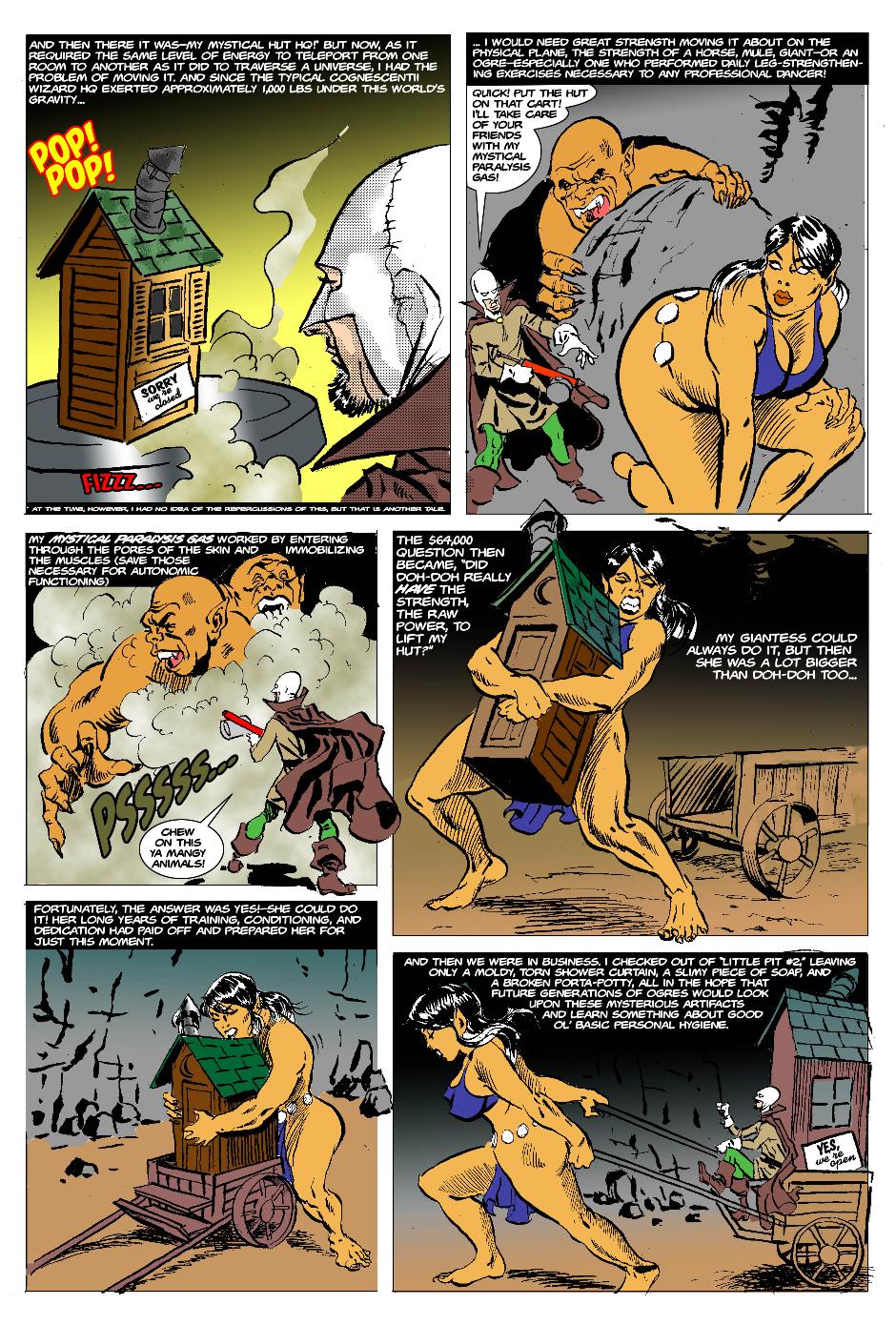 You’re no doubt wondering where I pulled that gas gun and teleporting equipment from? In case I hadn’t mentioned it, every Wizard of the Cognescentii is issued three primary mystical items upon incarnation into the material world of time-space to aid in his three-thousand year mission. These items are as follows: the mystical and powerful Staff of the Cognescentii (which I lost when I died at the hands of the Sky Giants (see HERE ); the incredible TiSDiS machine (which I recovered in today’s transmission and which is treated in more depth HERE ); and one general issue Cognescentii uniform (cloak and batteries in-cluded).

These uniforms, which can appear as simple robes, tunics, hose, jackets, whatever image the wizard re-quires for his mission, in any event appear old, re-paired, with patches or threadbare appearance, so that the wizard appears as some type of mendicant, wandering beggar, or tramp, an image consistent with the Cognescentii’s purpose to serve, not rule. Despite this humble appearance, however, the costume is anything but humble. Rather, it is packed with some of the most advanced equipment in the Universe.

• Self-Cleaning Utility: In some of the places we fre-quent, dry cleaners are hard to find (and no one wants to deal with someone who smells like an overloaded diaper), so the self-cleaning utility is the niftiest feature since bottled beer. This built-, tailor utility will even repair the suit in the event of tears—automatically!
• Built-in Climate Control Feature: A Cognescentii wizard’s mystical costume can adjust the heat and humidity via its built-in thermostat, granting the wearer a consistent 72° F in ambient temperatures ranging from -100° up to 240°.
• Defensive Mechanisms: Both the uniform and the cloak come with a built-in automatic instant defense utility, sending a mystical energy stream that causes the material’s fibers to instantaneously become as hard as steel and absorb the impact in the event of a kinetic energy event. In other words, dear reader, it’s great when a Groc decides he wants to play the “Knockout Game” on you.
• Autopilot: This feature allows the suit to take over in the event the wearer loses consciousness or requires specific movement patterns. This feature is most use-ful when the wizard is rendered unconscious yet re-quires to physically guard his person via some martial art style (“I know Kung-Fu!”), especially since Cog-nescentii wizards aren’t trained to be warriors, or if he requires some special dance step (tango, Waltz, etc) to charm some empress or court officials. What I like most about the Autopilot feature, however, is that it’ll have the suit walk me home if Its feeling too tired (or drunk…).
• immense Cargo Space: Lastly, yet perhaps the Cloak and Costume of the Cognescentifs most use-ful feature, is that secreted about the sash/belt, tunic/ robe, and inside of the cloak/cape (depending on the style the wizard has chosen) are dozens of pockets—extra-dimensional pockets! Extra-dimensional engin-eering, the forte of the Cognescentii, allows us wildly massive storage space right on our own persons. The combined cub, space of all these pockets out-Wal-Marts Wal-Mart and makes even one of your Boeing manufacturing hangars look a little cramped. Inside of these pockets are all sorts of usual items and goodies that the Cognescentii have stored away for as lumber yards, pharmacies, tools, clothing, weapons, metal, furniture, and, to be honest, a lot of junk as well.

But if clothes make the man, then definitely the Cloak and Costume of the Cognescentii make the wizard!

May your week be a blessed one!