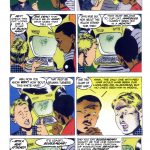 WAS TOMMY ROCKET A 20TH-CENTURY MAN?: A REVIEW OF THE EVIDENCE

Thank you for tuning in, dear reader! Loyal Tommy Rocket readers know that Tommy Rocket and the Goober Patrol is the story of a bratty super-genius who excels at making robots. We know he’s smart—but just how smart? Robots, computers, and connectivity are not so far-fetched in the 21st century—they’re reality. And AI (artificial intelligence) may be just around the corner. But is Tommy really a 21st-century kid? Let’s review the evidence: 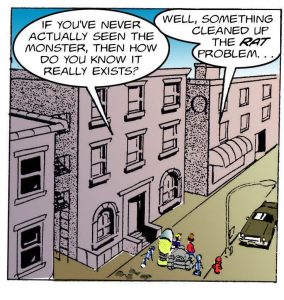 EXHIBIT 2: MODERN CARS? Please note the car in the bottom half of this panel. Does this look like one of your typical modern SUVs, sedans, or hatchbackS? It seems a little longish, doesn’t it? 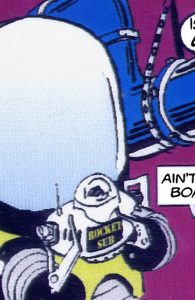 Our last exhibit is not so obvious, and probably only our most seasoned readers caught this last clue as to the time period when Tommy’s stories take place. Please note the close-up of the Aqua-Sub that Pi is holding in this panel. This little robot-sub of Tommy’s bears a very close resemblance to a popular toy of a very popular 1970’s action figure (whose first name began with “G.I.” and ended in “Joe,” hint, hint!).

Either Tommy found this vintage toy lying around in his dad’s old stuff in the attic, on eBay, or—OR!—Tommy received this as a birthday gift when he was a kid—when this “vintage toy” was still new! And along with the other clues, you would be correct in deducing the following: the stories of Tommy and Nate really took place in the 1970s! Tommy received this toy sub, quickly grew bored, started reinforcing it with metal and filling it with all sorts of circuit boards, circuitry, and new gadgetry and put it to use!

Now we know how smart this guy really is! (If only he weren’t so bratty…)