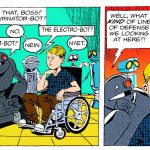 MEET THE CAST OF TOMMY ROCKET & THE GOOBER PATROL

Let’s wander on down the street, to the house located at 132 Primrose Lane, the one where the sounds of metal smashing against metal and concrete can be heard coming from the basement—the home of Tommy Rocket! Now let’s go on in and meet Tommy and his friends—if we dare!

Nate Turner: the narrator of “Tommy Rocket and the Goober Patrol.” Nate is Tommy Rocket’s Boswell and relates these stories from some future point in time. Nate wants to be a writer when he grows up (though at this point in time he’d like to be a secret agent). One of Tommy’s only “human” friends, Nate is friendly and usually well-behaved (unlike Tommy), though he does have a taste for adventure and excitement ( which is probably the reason he hangs around with Tommy).

Tommy Rocket: disabled since the age of two, Tommy Rocket is a super-genius prodigy whose IQ goes off the charts. Unfortunately, his emotional quotient isn’t anywhere near so high, as he can be imperious, spoiled, arrogant, suspicious, mischievous, xenophobic and just plain anti-social. Using his great intellect, he assembled his own robot band, his “Goober Patrol,” and never tires of reminding them of it either!

Traxx: one of Tommy’s first robots and best friends. Traxx isn’t too bright but fancies himself to be the Goober Patrol’s leader, as opposed to Pi (whom he loathes). Free-willed and sometimes impulsive, Traxx can also tend to get a little aggressive at times. Can this be because he was allegedly salvaged from an old Defense Department computer?

Pi: the world’s first sentient computer. Built for Tommy as a gift when he was two by his father, Pi isn’t dim-witted like the other robots which Tommy built. On the contrary, Pi is highly intelligent, but has a tendency to be overly pedantic or just plain boring. Pi is Tommy’s moral compass, as well as his teacher, baby-sitter, and oldest friend.

#21: younger and probably even more stupid than Traxx, #21 looks up to the older robot and generally follows him in his wacky schemes. This, in turn, tends to land both of them in trouble!

Jamie McGovern: another one of Tommy’s few “human” friends. Like Tommy, Jamie also lost the use of her legs while still young. Unlike Tommy, however, Jamie is friendly, kind, and social. Despite Tommy’s often nasty treatment of Jamie, she always tries to maintain a cheerful and friendly attitude towards him. Could it be that she senses a good heart beneath a cold exterior?

Fluky: Fluky is one of Tommy’s earlier attempts at robot building, and as such, communicates only in machine language. He gets around on compressed gas and coiled springs—half jumpting, half-flying. Needless to say, his flight isn’t very precise. He’s named “Fluky” because “it’s a fluke that something so goofy could have survived for so long.”